The Miami Dolphins had a rough start to begin the year losing to New England and Seattle. With the win against Cleveland, the Dolphins are once again on the right track.

We’re only two weeks in and the Miami Dolphins season couldn’t be more of a big question mark.

After the first two games, people thought it was the same typical Dolphins. Watching their opening season game to Seattle was tough. The team only managed to score one offensive touchdown, people couldn’t believe in this team. Then came the loss to New England’s second and third-string quarterbacks.

Now, it looks like the Dolphins are on the right track. With the 30-24 overtime win over the Cleveland Browns, the Dolphins are still in playoff contention. It’s only three weeks in the new season, but Miami needs to get their wins early.

Starting running back Arian Foster was out with a groin injury. His injury opened up the job for the running back stable. The rookie Kenyan Drake got the starting nod and had a decent game finding holes within the defensive front to run through. Drake got the Dolphins offense started and rushed for 37 yards. However, the game’s biggest play came from Jay Ajayi as he rushed for the game-winning score.

“When it came down to the last drive, I got my number called and it was about being consistent, holding onto the football and when I got the chance to get in the end zone, it was about making that play and that’s what I was able to do” said Jay Ajayi.

However, offensively, the running game might’ve been the only bright spot. On the second play of the game, Ryan Tannehill threw an interception to his former teammate, cornerback Jamar Taylor.

Nonetheless, the Dolphins wouldn’t have time to sit around and sulk for long. Defensive end Cameron Wake made a monster hit on Browns quarterback Cody Kessler which caused a forced fumbled recovered by Jason Jones. The Dolphins then woke up and two minutes and thirty-seven seconds later the offense went on a 5 play, 61-yard drive which was capped off by a touchdown pass to DeVante Parker.

The defense didn’t let up the entire game. The Browns scored a grand total of two touchdowns and were forced into kicking field goals. The Dolphins also acquired four sacks.

For as good as the Dolphins defense has played most of the season, they need to address their offensive inefficiencies. The Dolphins have struggled this season putting points on their board and a huge result of that lies on the shoulder of their quarterback Ryan Tannehill.

The fifth-year starting quarterback will be the biggest reason the Dolphins either make the playoffs or miss it. His inconsistent play continued in this game as he finished with an average game. Tannehill finished with 319 yards, three touchdowns, two interceptions and a quarterback rating on 39. 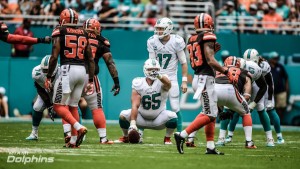 “I think he (Ryan) had some mistakes that I know he’d want back. I know there was a couple times where he was in the right position and somebody else broke down. We had way too many mental errors” said head coach Adam Gase.

Moving forward will be the most difficult part for Miami. But they are no stranger to having difficulty.

Just after the tough win against Cleveland, Miami will have to make a quick turnaround as they’ll travel up to Cincinnati to play the Cincinnati Bengals. The Bengals are one of the contenders in the league and they’ll be playing them in the NFL’s weekly Thursday night showcase. The Dolphins will have to rest up and get ready for this game because a 2-2 split would do them wonders. Miami’s next four games are against fairly decent opponents in the Tennessee Titans, Pittsburgh Steelers, Buffalo Bills, and New York Jets and they’re all at home.

If you’re a fan of football you couldn’t have scripted a Monday Night Football game in Miami any better. Unless, that is you’re a fan of the Miami Dolphins. If you walked into Sun Life […]

It’s been said that character, like a photograph, develops in darkness. It’s during those dark times in life when we see our true character. For Carla Hill, she’s been developing in the darkness. Hill, who’s […]