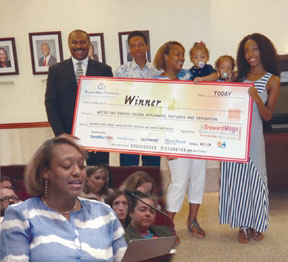 Winner Monique Francis (inset) and family. “It doesn’t take much to cut back.”

The Broward Water Partnership (a collaboration of 18 local governments and water utilities) has selected the lucky homeowner who will receive new water and energy saving appliances including a refrigerator, washer, dryer, dish-washer, irrigation system and water-conserving plumbing fixtures in for the kitchen and bath.

Jim Barber from Plantation who built a website, the deBlasio family from Davie who created a poster, Mercedes Eques of Pembroke Pines who prepared a humorous Powerpoint presentation, Leckie Scott of Coral Springs who wrote a poem, Michael and Lisette Ruiz of Davie who wrote a rap song, Maria Hernandez of Sunrise created a flyer and Jennifer Jhon of Fort Lauderdale created a video with her kids.

The winner is Monique Francis of Miramar who wrote a poem(see poem below) and whose children created illustrations. In her narrative, Ms. Francis noted that as single mother of 4, she’s learned to ‘trim the fat’ financially and that using the washing ma-chine and irrigation system less, she could really see a difference in her water bill. “It doesn’t take much to cut back, as the outcome is not only beneficial for us now, but also for future generations. Clean water equals life and water conservation ensures our future survival. Small changes today equal big rewards tomorrow,” she wrote.

Thanks to BrandsMartUSA and WaterOptimizer™, she’ll get to trade her energy and water using appliances and irrigation system for brand new conservation models.

“The partnership goal for this program was to help people understand that conservation is something we can all do and that when we save water we save money, too,” said Jennifer Jurado, Ph.D., Director, Broward County Environmental Planning and Community Resilience Division. “The ability to save isn’t limited to water-conserving toilets or even water-conserving appliances. By changing our behavior, for example, irrigating less or using the washing machine less, as Ms. Francis pointed out, we can each do our part.”

For the next year, Ms. Francis will keep track of water and energy savings so that the Broward Water Partnership can document what’s possible.

Omitting all the waste.

Now-a-days we must conserve to

Save the human race.

Reclaiming water, cutting back and making use of rain.

Valuing our water will secure our planet’s fate

Ensuring that we all survive to see another day.

She has published small initial research studies in the past few years showing that working with a programming tool improved young children’s skills on traditional sequencing tests and related tests of executive functioning. For example, before going through a robotics and programming curriculum, when asked to describe the process of brushing their teeth, children gave just three or four steps. Afterwards, they were able to break down the process into 20 or more steps.

“If you get better at sequencing, it has a measurable positive effect on reading comprehension,” she says. “A parent can have their kid engage in coding with the knowledge that a lot of kids won’t be-come programmers, but there is this broad-based benefit.”

The idea of introducing soft-ware widely in kindergarten or even preschool is not without controversy. Victoria Dunckley is a child psychiatrist in Los Angeles who has just published a book called Reset Your Child’s Brain, about the dangers of technology use. She has pre-scribed total abstinence from screens to hundreds of patients, to cut back on the symptoms of a wide range of childhood mental ailments, from ADHD to OCD.

“Even educational screen time can cause a lot of issues,” Dunckley says. “A lot of these kids can’t tolerate any kind of screen time at all. I used to be able to just write a note for the kid to take to school to say, don’t have any computer time. But that’s changed with iPads and the Common Core.”

She would prefer holding off introducing screens in classrooms until middle or even high school. “I am horrified by the flipped classroom,” she said.

Bers and Patterson actually agree, to a point. They believe that in the early childhood years especially, long periods spent passively in front of a two-dimensional screen would be developmentally inappropriate.

“Working with tangible objects is fundamental for young kids,” Bers says. That’s why her Kibo robot kit can be programmed by physically rear-ranging wooden blocks, a sys-tem called CHERP. Similar to alphabet blocks, each one re-presents an instruction, such as “forward,” “back” and “spin.” They snap together to complete a “story” for the robot to act out.

It’s important to “be able to move between on-screen and on-floor activities,” Patterson agrees. His solution is robots. He often introduces programmable toys like Sphero, Ollie, Dash and Dot, which roll around and carry out simple instructions; remote-controlled air-planes; and LED lights that can be programmed to flash in colorful patterns.

“I’ve got first-graders who have the basic skills to program a smart house,” he says. In addition, he usually has at least two students work together on each device, to help develop their social skills while they learn.

Besides fears about safety, and a lack of resources for de-vices and software, the third biggest obstacle to wider introduction of coding in kindergarten is probably a lack of knowledge and confidence on the part of teachers and parents. But Bers stresses that engaging kids in the expressive use of technology can start simply, with equipment you probably already have in schools or at home.

“Start with what the child wants to do, not with what the technology can do,” she advises. “Make a card for Grandmother’s birthday or a slide-show of your last vacation. Sometimes using Word can be very powerful.”