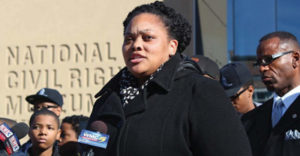 “I believe that we are in a situation with our city where we can’t wait for change,” said Shelby County Commissioner Tami Sawyer, now an announced candidate for mayor. (TSD File Photo: Lee Eric Smith)

Shelby County Commissioner Tami Sawyer has made the decision. She is running for mayor, taking a “social leadership stance.”

The first-term District 7 representative “expound[ed] on plans to drive progress and change and broaden impact for Memphis” during a press conference at Makeda’s Homemade Cookies, 488 S. 2nd St., on Friday (March 8, International Women’s Day) at 10 a.m.

A “Memphis Can’t Wait” rally designed for Sawyer to “share her vision for Memphis” took place at Clayborn Temple downtown on Saturday (March 9) at 5 p.m.

Prior to these two events, Sawyer visited The New Tri-State Defender, outlining her reasoning and timing for a mayoral bid that pits her against incumbent Jim Strickland and the announced candidacy of former Mayor Dr. Willie W. Herenton.

“I am running now because when I see our city and I see our people and I look at the conversations that we are having at high levels of leadership, it doesn’t incorporate what is next for the impoverished, people of color, women, every person that is not considered in our vision for Memphis,” said Sawyer, director of diversity and cultural competence for Teach for America in Memphis.

“We can’t continue to repeat the mistakes of the past, nor can we survive off of ‘basic’ leadership.”

Some openly question the timing of her mayoral bid, saying it’s too early.

“I believe that we are in a situation with our city where we can’t wait for change,” Sawyer said. “We’re facing the evaporation of black wealth from the country by 2030. By 2030 we will have zero dollars of net wealth in the black community.

“When you look at the opportunity indicators for where Memphis is, that means we are going to lose any of those economic advantages and wealth collectively in the next three to four years. We must get serious about policy and programs and support that recognizes that 50 percent of our kids are born below the line of poverty. …We don’t invest in schools. Zero percent of our city budget goes to education. I don’t think we have another five years to risk our people.”

As Sawyer enters the race, Strickland is a month-plus into his re-election bid, vowing to go “door to door, home to home” with his basic theme: “Keep that Memphis momentum going.”

Economic development downtown is great, but it doesn’t reach the majority of Memphis, Sawyer said.

“We don’t have time for trickle-down economics to be the way to go. One percent of the population is benefitting from this development. …We must debate with developers about minority and women business percentages. Where is the investment in our communities? What impact is this development going to have?”

“Momentum for one percent is not momentum for Memphis. Momentum for Memphis looks likes programs and infusions and economic support for small business owners and entrepreneurs. We are a resilient and creative city, but we don’t always have the resources we need for our ideas to really grow and shine and become profitable.

“We’ve seen it happen in other cities and it can happen here where instead of being excited about new buildings and development, we can get excited about how many small businesses are really popping up. That money actually lands back in the community.”

Sawyer said she has the courage to keep pressing forward in making the case for the poorest Memphians, adding that such a commitment doesn’t make her anti-business.

“What I don’t believe in is corporate welfare that is given in a way that we’re taking tax dollars away from programs and benefits for the community. That’s allowing a small percentage of our population to continue to grow the wealth gap in Memphis.

“As a commissioner thus far I’ve had that courage,” Sawyer said. “When Union Row came up, I questioned whether we should vote for it. When they came back a second time and asked for $60 million for a parking garage downtown, I said ‘no.’

Regardless of where we find these pockets of money, whatever fund we say they’re in, at the end of the day, the way the city generates money is from some sort of taxes. We’re continuing to give tax money into the pockets and developments that won’t be accessible to most of us. …

“I would say to corporate interests that Memphis has to – right now – uphold and stand with its strongest resource, which is our people, all of our people.”

Noting that public safety was a prime concern among those who responded to a TSD survey of issues for the mayoral candidates, Sawyer said public safety must be addressed in a way that “takes us away from a tough-on-crime stance. Putting more people in jail, being tougher on crime has yet to solve crime anywhere.”

With Memphis’ high levels of poverty, having tough on crime/lock’em up stances create more dire straits for people,” she said.

“Being put jail, you get all kinds of fees, you lose your job, your rent doesn’t get paid. We are creating this ecosystem where most of the crimes that we are seeing are crimes of poverty. We have to address public safety in a more holistic way.”

Specifically, she wants to take a community-policing program such as the one operating in Frayser and make it a broader model for the city.

Education is a prime factor in public safety, Sawyer said, advocating for devising a way to redirect of some of the get-tough-on-crime funds into the schools.

One TSD survey participant asked this: “Will you divest from the prison-industrial complex and invest in K-12 public education?”

“Absolutely,” said Sawyer. “That is a major part of why I am running. You are going to go where you are directed to go. Right now, we are directing our energy and our money to say we need more beds in jail. We need more police…What about more teachers, more school counselors, more trauma-informed advocates and more principals?”

Sawyer said it was a mistake for Memphis to disinvest from the Memphis and Shelby County Office of Reentry, calling such a program vital.

“When people return home from being incarcerated, their family may or may not be in the same place they were; they don’t recognize the community; they don’t understand the technology. We need these community programs in place to help reconnect – not just to work – but to our community; so that they feel they have a place here. So that the decisions they make for the rest of their life are ones of value to them and where they live.”

Many community programs are going beyond intervention to embrace prevention and need more city support to make them known and more widely available, she said.

If elected, Sawyer would be the first woman elected mayor of Memphis. In the year of Memphis’ bicentennial, that would be exciting, she said, and “a bit sad (that it has not happened before).”

Her leadership team would reflect people with “passion and commitment to our community. …and innovation. …

“We know we can’t solve our issues and challenges with business as usual. Let’s innovate and reach people where they are…. I do want a diverse leadership team. I am going to be looking for women. I’m going to be looking for people of color who don’t identify as black to join us as well. We have the fastest growing immigrant population in the South, the fastest in Tennessee. Where is our bilingual support? How are we providing services to our Spanish speakers, who haven’t learned English yet but need critical city services?

“Who are our liaisons to different communities? We have a vibrant Muslim community in North Memphis; our LGBTQ community. My leadership team will look like our city, which is beautiful, diverse and multilayered and intersectional.”

Activism in the mayor’s office

Sawyer was the most visible figure in the #takemdown901 movement that advocated for the removal of Confederate-era monuments from parks then owned by the city. She is known as an activist and embraces the term.

“Activists have been mayor for a long time. Maynard Jackson (Atlanta) was an activist. President Obama was an activist. Sometimes we look at activist as a dirty word and it shouldn’t be. An activist act. …I move issues into the forefront. I drive conversation. I drive change. And isn’t that what we want in a mayor?