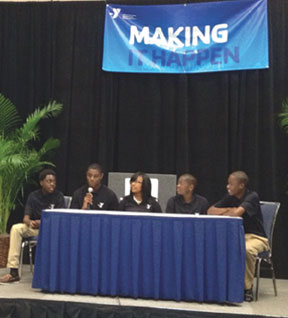 The YMCA of the USA(Y-USA) held its National Healthy Communities Conference on May 11-13 at the Greater Fort Lauderdale Convention Center.  The conference focused on a wide range of panel discussions which identified healthcare issues impacting communities across the country and provided experts who shared possible solutions aimed at improving the quality of life of those most adversely affected, particularly within minority communities.

Broward County was chosen as this year’s site for the conference by Y-USA officials primarily due to the success of a local test pilot program. The “Pioneering Healthy Communities” Project began in Lauderhill 2011 and was funded by a grant from the Y-USA

The YMCA of Broward County, working through its Lauderhill branch, set out to get local residents to participate in the” Live Well Lauderhill” student project. It also joined forces with the community and public officials to implement the Lauderhill Action Plan.  Local YMCA officials say their approach to finding out what the community’s needs were focused on the ideas which originated from the bottom up not from the of the top down

Andrea M. Crawford Executive Director of Health Innovations YMCA of Broward County has had a decade long stint with the Y and knows first-hand how effective  community based partnerships can be.  The local YMCA drew on those experiences as they grew closer to the community.

“The YMCA of Broward brought together several communities group partners and began working with them on thinking about community. The first “Pioneering Healthy Communities “conference  including representatives from the Broward County Sheriff’s Office to Southeastern University the Broward County Health Department, Memorial Healthcare Services; from Health Foundation of South Florida, The Children’s Services Council all of whom were credited by Crawford for their support with the project.”

“We also involved those who have a lot of involvement and power in the community as well. We talked a lot about what are the assets in the area that we can really build upon and get some momentum towards building a healthier community. What we then found what was really a rich resource in talking with our teens. These teens really gave us clarity on what were the key issues that were impacting their health and their opportunities for success and one issue that rose to the top was the issue of the pedestrian over path that spans the Florida Turnpike. And so we started working with the teens in Lauderhill and they helped us really craft a plan to add more safety features to that bridge, “added Crawford.

The success of the project did not escape notice from top YMCA local officials and ultimately Y-USA officials on the national level.

“The Lauderhill community has been extremely responsive. Our relationship with city government, our relationship with other non-profits, our relation-ship with the Turnpike Authority, the Broward County School District-the list goes on. Again that’s the power of the Y. We convene people for the betterment of the community. And so when you put all those important people around the table and you hear from kids and you hear from some other people in the community that live in that community  who say, ‘These are our issues, ‘you can solve a lot of problems that way,” said Sheryl Woods, president/CEO of the Broward County YMCA.

The YMCA of Broward County relied on input from a broad base of individuals from the healthcare, business, and edu-cational community. Jeffrey Williams works for the Broward County School Board. He is a Contract Manager in the Department of Juvenile Justice and is a Facilitator for the School Board’s Black Male Success Task Force.

He deals with at risk students primarily who come from neighborhoods just like those in Lauderhill where the project  began.

Part of his responsibility is to address the issues of low academic achievement by Black male students who attend local public schools. He strongly supported the efforts of the Y to deal with some of the same issues he faced as he sought solutions to the problems facing youths in the community.

“The YMCA is looking at health issues which can be a direct indicator, working with the communities to make sure that students are healthy and eating right, to also promote the concept that healthy eating leads to a better education. This conference has been great in regards to those indicators as  physical indication with education and with health regarding different classroom instructions which also promote better eating habits leadsing  to higher grades. This effort goes back to the saying, ‘It takes an entire village to raise a child.’  Most of our households are 80 percent single parents so we need to bring all our agencies together to insure our families are successful.”

The three day conference covered a wide range of topics which addressed the socio-economic issues: “Feeding the Future, Building Healthy Food Systems in Schools, “Engaging in Grassroots Efforts, The Use of Community Health Workers,” and “Advancing Equity with Nutrition Strategies,”. More often than not these areas are most heavily populated by people of color who lack real political and economic clout.  So many who reside in these urban areas rely on public governmental assistance for their basic survival needs.

Amanda Navarro is the De-puty Director of Policy Link, which has offices located in New York, California; Washington, D.C. Navarro conducted a panel discussion. Policy Link is a national research and action institute that focuses on economic and social equity by lifting up what works

“Over all what I was trying to frame today during my presentation is this notion of how race and income and wealth have played into where we are now that relates to the problem of disparity in our country. And that to really understand that  how policies and decisions that have been made impact the communities of color in a way that has not allowed for us to really flourish and prosper and have full opportunities  to have jobs and good wages, a good education, a safe home, safe parks and places where we can access healthy foods.”

Proper nutrition is a vital part of the growth and development of children. Often times, however, many children go to school hungry every day. Studies have shown that there is a direct correlation between children who perform poorly in school who do not receive adequate nutrition. These health disparities also are more commonly found among African American and Hispanic children enrolled in our public schools.

Verenda McCoy-Richards- the Vice-Chair of the CAC which is the Children Advocacy Center for The Y (52 sites around Broward County providing programming),” I’m into my second year with the Y. My reason for being here at the conference is to learn how we can position ourselves as a Y entity to addressing a lot of the health disparities that are impacting Broward County.”

“I think it’s tough to just pick out one single issue which is the most important facing our youth because everything is compounded; everything from health, access to good food, which impacts brain development in children their capacity to learn a host of other violent issues in terms of how kids are growing up in unsafe areas engaging their parents in all that,” added McCoy-Richards.

Jocelyn Boyd, Executive Director of the YMCA of Lauderhill, worked directly with students who are part of her center’s afterschool program which took part in the Live Well Lauderhill student project.

“My involvement with the students has been at the grassroots level working one on one;  having the responsibility of developing their leadership skills and developing that voice… Then once that voice came, then we started addressing the solutions. Our next goal is to engage much more of the people that will live through this and will continue to propel it forward. We’ve done a lot with the infrastructure piece, now we’ve got to work on the people piece”.

Shasmin Carter and Kavon Baxter, who attend Boyd Anderson High School, also participated in the Live Well Lauderhill student project. They were part of a panel presentation at the conference who shared what their experience was like.

“I participate and I’m very active in the Lauderhill Y so Live Well Lauderhill was sort of like a get-away for me. Everyone was participating in sports and other things.  I enjoyed the first thing that we did, which was the walk over the Turnpike Overpass with other people because they got to experience what it was like,” said Carter

“I joined the Lauderhill Y Live Well Program because I was in the YMCA after school program. The program taught me a lot about how to be a leader. It taught me responsibility. It taught me that one voice can change a lot of things,” added Baxter.