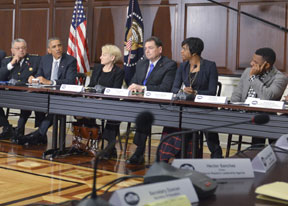 WASHINGTON, D.C. (NNPA) – In an oval office meeting that some have called “historic,” a group of young activists met with President Obama to discuss the crippling effects of police brutality in the Black community, the militarization of police departments and the need for systemic reform that sparked months of protests following the shooting death of Michael Brown, an unarmed Black teenager, in Ferguson, Mo.

The young activists list of demands included: the demilitarization of local police departments, investing in community-led restorative justice programs, and enhancing data collection of police activity at the federal, state and local levels.

Tef-Poe, a St. Louis hip-hop artist said that the movement is gaining traction among young people and a bridge is also being built between the young activists and the older generation.

“People are starting to jump on board at an alarming rate and the next move is to sustain this and to push for real comprehensive accountability concerning racial profiling and police brutality,” said Tef-Poe.

Following his meeting with community stakeholders faith leaders and law enforcement officials on building trust between police and the community President Obama said that when any part of the American family does not feel like it is being treated fairly, that’s a problem for all of us.

The president announced a number of key proposals, including the creation of a task force that will identify best practices to build stronger ties between police departments and the communities they serve, reforming the controversial 1033 program and promoting the use of body cameras. The president said that he wants to invest $263 million, including $75 million to buy 50,000 such cameras.

According to a recent review of federal programs that send equipment to local law enforcement agencies (LEAs), “the programs reviewed do not necessarily foster or require civil rights/civil liberties training and they generally lack mechanisms to hold LEAs accountable for the misuse or misapplication of equipment. This variation among federal agencies makes tracking the overall effects, use and misuse of federal or federally-funded equipment difficult.”

Although the group was encouraged by some of the president’s proposals, Ashley Yates, co-founder of Millennial Activists United, a St. Louis-area civil rights group, said that there needs to be youth voices on the task force as well.

Jose Lopez, a lead organizer with Make the Road New York, a civil rights group focused on Latino and working class communities, said that collecting and sharing data on police activity is instrumental when it comes to holding police officers accountable when they break the law or violate a citizen’s rights. Right now, Lopez said, that data is either not being collected at the department level in municipalities across the country or the data being collected is not voluntarily shared.

“It’s absurd that this is all voluntary,” said Jose Lopez, a lead organizer with Make the Road New York.We need to set a precedent at the federal level so that states and cities fill the need to report.”

Lopez continued: “We need to make sure that we’re mandating reporting of police precincts the same way that we mandate reporting of schools in this country.”

Phillip Agnew, the executive director of the Dream Defenders, a diverse civil rights group founded by young people in the aftermath of the shooting death of Trayvon Martin, an unarmed Black teenager in Sanford, Fla., said that the group of young activists appreciated the meeting with the president and that it was the result of decades and decades of work, organizing, and unrest.

Yates said that the young people protesting police brutality and the militarization of state and local law enforcement agencies nationwide need to see President Obama use the power of his position to enact some real change.

“We have been on the ground making the changes that we can in our community, but these are high level changes that we need to see,” said Yates. “These are systemic issues and we need systemic solutions for them. We need policy and the backing of our Black president to say that this is a racial issue and that he stands behind us.”

Ferguson protesters scored a win in court last Thursday when Judge Carol Jackson, a United States District Court for the Eastern District of Missouri issued a temporary restraining order banning the use of “tear gas, smoke, pepper spray or other chemical agents against demonstrators without first giving a clear warning and a clear means of exit.”

“The order further prohibits that tear gas can’t be used against protesters to punish or frighten them for exercising their First Amendment rights,” stated the press release.

In the press release, Denise Lieberman, a senior attorney with the Advancement Project, a multi-racial civil rights group, and one of the lawyers involved in the case said that the ruling sends a strong message that police acting under the Unified Command must respect the rights of protesters to demonstrate, and cannot use excessive tactics to curtail their message.

“Police overreach was exactly what people were protesting in the first place,” said Lieberman.

Lawyers for the plaintiffs said, “The judge further made clear that tear gas can’t be used just as a form of crowd control or to frighten protesters.”

Justin Hansford, an assistant law professor at St. Louis University and a member of the Don’t Shoot Coalition, called the ruling an “important moment for the movement” that sprang up in the St. Louis suburb and spread across the nation.

“This sends a strong message to people here and across the country that tear gassing and assaulting peaceful demonstrators in the Unites States of America compromises our core values,” said Hansford. “The next step is holding police accountable for infringing on our vital human and constitutional rights.”

ESSA and Special Education: The spectrum of hopes and fears of a parent advocate

The spectrum of hopes and fears of a parent advocate […]

While the top three candidates this year are all men, women have again taken a leadership role in ensuring free and fair elections and they’ve been largely responsible for what’s believed to have been an electoral race free of determinative manipulation. […]