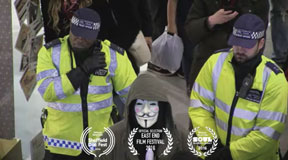 There is baggage living in this [Black] skin

If you thought the injustices of brown and Black people was an American issue, think again. “Institutionalized racism with employees that aren’t racist,” is a global problem. Usayd Younis and Cassie Quarless, a radical filmmaker and producer/director respectively, capture the brave resistance of several young UK organizations who share passion for social and political change in a feature-length film entitled “Generation Revolution”. The documentary is raw. Uncensored. Unapologetic. Eye opening.

For Younis and Quarless, it was the last stop on their U.S. tour showcasing the film.

Much like the U.S., the foul smell of police covering up the death of Black men while in their custody lingers in the air in the United Kingdom. The case of Sean Riggs is worth a Google search and certainly one of the many triggers that sparked the need for radical change in London. ‘Generation Revolution’ chronicles the rise, at times, dismantling and rebuilding of these activist groups whose members are young, brown, Black and unafraid; whose main objections are combating racism and gentrification. Between peaceful protests, powerful testimonials, captured police interactions/altercations and the aiding of homeless people, the film takes you through different emotions that ultimately end with the continued passion to fight for equality for all.

The Black Lives Matter Broward Alliance organized the event and concluded with a Q&A between the directors and the audience offering a healthy dialogue that inspired both parties to keep moving forward. “Activism is better than doing nothing.”

To learn more about the film, visit www.genrevfilm.com. To become involved with the BLM Broward alliance, go to their website at http://blacklivesmatteralliancebroward.org./

Blackonomics: Do Black organizations Really have our backs?

Do Black organizations Really have our backs? […]

Election 2018: Another Stop on the Chisholm Trail?

The 2018 elections will mark another stop on the Chisholm Trail, where Black women are poised to build on Chisholm’s legacy of leadership, determination, and desire to disrupt the status quo. […]