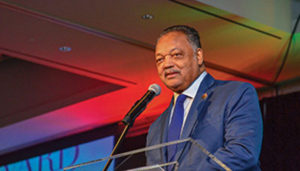 If history has proven one thing, it’s that when Reverend Jesse L. Jackson speaks, the nation tends to always listen. Rev. Jackson continues to use his voice to speak on an atrocity that has plagued Black people for decades—the horrific act of lynching.

While in town to receive the 2018 Lifetime Legacy Award from the National Newspaper Publishers Association (NNPA) at their NNPA Awards National Legacy Awards Black Tie Gala and Annual Convention in Norfolk, Virginia, Rev. Jackson spoke to NNPA publishers about the need to adopt legislation to address the despicable act of lynching.

“Lynching should be a federal crime,” Rev. Jackson told the group of publishers at the NNPA Annual Convention. “Blacks are still being lynched today. Not just with a rope. Unarmed Blacks are being killed on a regular basis and it must be addressed. More people were killed after slavery than before slavery. Prior to the ending of slavery, we were considered assets, but after slavery we were considered a threat, because we could vote. We need this legislation now.”

Rev. Jackson believes that addressing the issue of lynching in this country is long overdue, and he has been aggressively pushing for members of Congress to step up to the plate and officially make lynching a federal crime. Rev. Jackson told NNPA publishers that he has spoken with the Congressional Black Caucus (CBC), Minority Leader Nancy Pelosi (D-Calif.) and many other top congressional lawmakers about this issue.

As a result of Rev. Jackson’s targeted efforts, Rep. Bobby Rush (D-Ill.) recently introduced a bill to amend section 249 of title 18 in the United States Code, specifying lynching as a hate crime act. After Rep. Rush introduced his bill, the three African American lawmakers in the U.S. Senate followed suit by drafting bipartisan legislation to classify lynching as a hate crime that would carry a more serious sentence for the act.

The three African American senators—Cory Booker (D-N.J.), Kamala Harris (D-Calif.) and Tim Scott (R-S.C.)—drafted the “Justice for Victims of Lynching Act of 2018,” which defines the act of lynching as “the willful act of murder by a collection of people assembled with the intention of committing an act of violence upon any person.”

“It’s a travesty that despite repeated attempts to do so, Congress still hasn’t put anti-lynching legislation on the books,” Sen. Booker said in a statement regarding the legislation. “This bill will right historical wrongs by acknowledging our country’s stained past and codifying into law our commitment to abolishing this shameful practice.”

Although lynching has been a terrible and traumatic act that has ruined the lives of many Black families for decades, the U.S. has never passed any form of federal anti-lynching legislation since its inception. The Justice for Victims of Lynching Act of 2018 highlights the fact that several attempts to pass federal anti-lynching legislation failed to gain support from the U.S. Senate even though seven sitting U.S. Presidents pushed to have the legislation passed.

“Lynching is a dark, despicable part of our history, and we must acknowledge that, lest we repeat it,” Sen. Harris said in her statement supporting the need for the bill. “From 1882 to 1968 there have been 200 attempts that have failed to get Congress to pass federal anti-lynching legislation; it’s time for that to change.”

The Justice for Victims of Lynching Act of 2018 also points to statistics taken from research compiled by Tuskegee University that reveals more than 4,700 people were lynched between the years 1882 and 1968. The bill also states that about 75 percent of the lynching victims were Black and nearly 99 percent of all perpetrators of lynching escaped from punishment by state or local officials.

“This measure is certainly well past due, and I am glad to be able to join in efforts that will underscore the severity of this crime,” Sen. Scott said in his statement highlighting the need for the legislation. “This piece of legislation sends a message that together, as a nation, we condemn the actions of those that try to divide us with violence and hate.”

Congressional lawmakers have known this to be an issue for decades, and in 2005, the U.S. Senate even brought a resolution to the Senate floor, where they sought to apologize for never approving any federal anti-lynching legislation in the history of the country. Sadly, only 80 out of the 100 senators showed up for that vote, which eventually passed on a voice vote only.

Lynching has been at the forefront of many discussions in this country for decades.

Back in April of this year, the National Memorial for Peace and Justice opened up the nation’s first memorial to the public in Montgomery, Alabama, dedicated to the legacy of enslaved Black people, and as a constant reminder to America about the countless number of people who were terrorized by the horrific act of lynching.

Going back even further, the issue of lynching was heavily highlighted by publisher and journalist Ida B. Wells. She led an anti-lynching crusade in the U.S., using her platform of journalism to address the issue of lynching after many Black people, including several of her close friends, were brutally lynched.

In a speech delivered in Chicago in January 1900 entitled “Lynch Law in America,” Wells spoke to the issue of lynching and described the challenges of having a lack of accountability for these brutal and despicable acts of domestic terrorism.

“Our country’s national crime is lynching,” Wells began her speech by saying. She continued, saying, “It is not the creature of an hour, the sudden outburst of uncontrolled fury, or the unspeakable brutality of an insane mob. It represents the cool, calculating deliberation of intelligent people who openly avow that there is an “unwritten law” that justifies them in putting human beings to death without complaint under oath, without trial by jury, without opportunity to make defense, and without right of appeal…It is considered a sufficient excuse and reasonable justification to put a prisoner to death under this “unwritten law” for the frequently repeated charge that these lynching horrors are necessary…And the world has accepted this theory without let or hindrance.”

Pushing for federal anti-lynching legislation also became a primary focus for the NAACP over time. The NAACP gathered tons of statistics about lynching in the country, and released a chilling report entitled “Thirty Years of Lynching in the United States, 1889–1919” which gave the organization leverage to push for federal legislation.

To date, however, no federal legislation has passed.

Rev. Jackson is still pushing to change that. He believes that having elected officials in Congress who see this as important is significant as well, which is why Rev. Jackson is supportive of the NNPA’s efforts to register 5 million new, Black voters before the November midterm elections.

“We will not stop until justice rolls down like waters and righteousness like a mighty stream,” said Rev. Jackson. “We must Keep Hope Alive!”

A recent panel discussion hosted by members of the Congressional Black Caucus, showcased the importance of an education in Science, Technology, Engineering and Mathematics (STEM). […]

Two such institutions in Broward County took on this charge, holding an informative gathering where state and local candidates had the opportunity to speak directly to Black voters. The Westside Gazette Editorial Board’s 2nd Annual Sweet Potato Pie, Politics, and Ice Cream event was held at the historical Mount Hermon AME Church in Fort Lauderdale on August 18th. […]