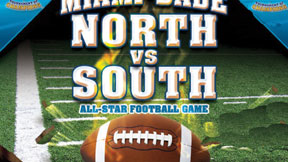 The most prestigious area in the country, the hotbed for high school football talent, will once again shine in the spotlight as the 21st edition of the Tournament of Champions Miami-Dade High School All-Star Football Game on Saturday, Dec. 19 at Curtis Park (1901 N.W. 24 Ave.) in Miami.

The game, which had long featured the best of Miami-Dade and Broward – and most recently – other athletes from southeast and southwest Florida – has returned to its roots this year with a showdown between the best of 305 – where the lines are drawn and the county is split into North and South.

“This is high school football at its very finest,” said game founder and organizer Wesley Frater. “Look on any NFL roster or watch a collegiate game on Saturdays and you will find that Miami-Dade County, the 305 area code is well represented.”

The Warren Henry Miami Dade High School Player of the Year Presentation will be Friday Dec. 18 @ 11a.m. at Warren Henry Dealership on 441.

Proceeds from this year’s soiree benefit the “Give Me Dignity Foundation” speaking out on sexual abuse of children in the Caribbean.

All-Star Game Kickoff is 7 p.m. and tickets are $12. For in-formation, call 305-910-9010. The head coach for the South is David Cooney from Southridge and the North head coach is Darryl Heildberg of Miami Norland.

Elite Underclass Combine to be held earlier in the day

In addition the North vs. South All-Star event, the day will start off with a prestigious underclassmen combine that will feature some of the best up-and-coming football prospects the entire south Florida region has to offer.

The combine will be the first forum of the off season to get rising seniors, juniors and sophomores into the spotlight. Every player that attends will be listed and promoted along with player evaluations and videos that they have had from this past year.

This is a chance for many underclassmen in Miami-Dade, Broward, Monroe, Collier and Palm Beach to come down and get on the map. Players attending this event will get out there for all to see and start the ball rolling for the upcoming season.