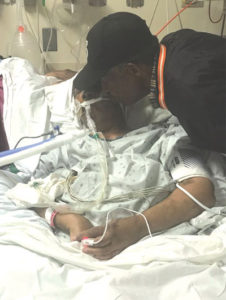 Luther Younger, a 98-year-old Korean War veteran, walks about six miles each way, rain or shine, to visit his paralyzed wife in the hospital, according to Spectrum News Rochester.

Luther and his wife, Waverlee, have been married for over 50 years. “I ain’t nothing with-out my wife,” Younger told Spectrum News. “It’s been a rough pull. It’s been tough.”

“They both live with me,” the couple’s daughter, Lutheta Younger, tells Yahoo Lifestyle. “I moved them out of their house, moved them in with me.” Along with her sister Joyce Johnson, the two have been taking care of Waverlee and Luther, in the same way her mother always took care of her and her siblings, Lutheta says.

According to Lutheta, her father has been walking to and from the hospital for a long time. “He doesn’t have to, but he wants to. I can drive him. He just doesn’t want to wait; he’s impatient.”

Waverlee has suffered from brain cancer since 2009, but Luther fondly remembers their years together. “She’s the best cup of tea I ever had,” the de-voted husband told Spectrum News. “She would come in and kiss me and say ‘baby’ and feed me in the bed, and this is what I need right here.”

“Thewhole time she was sick, he would stay overnight [in the hospital],” Lutheta says. “He wouldn’t leave her.”

When asked what her father thinks of all the attention he’s receiving, Lutheta says, “You know, he just wants the best for my mom.”

A GoFundMe page was recently set up for the family to help with hospital expenses and the cost of rides to and from the hospital.

Nurses are oftentimes unsung heroes that are left in the shadows of doctors who get much of the credit.

A nurses featured below left a beautiful mark on the history of healthcare that could never be erased. Many times, in the face of adversity, these women gave their all to their patients and careers, many times behind the scenes and without recognition. That’s why WE honor them. We have seen their effort, and their history-making triumphs that have laid the groundwork for many nurses today. Take a look below at just some of the groundbreaking nurses throughout history