The Ravens came to Miami and pulled out a 27 to 10 win. Overall, the effort from the Dolphins showed that this is still preseason. The Dolphins were leading the Ravens 10 to 3 at halftime, and in the second half the Ravens outscored the Dolphins 24 to 0.

The first half was going well, holding the Ravens to only 3 points. Although the Ravens were completing passes, the defense was able to get stops and keep them from putting points on the board. The third quarter started and all hell broke loose. The Ravens rookie first round draft pick Lamar Jackson had a passing and a rushing touchdown, completing 7/10 passes for 98 yards and rushing for 39 yards on 3 carries. With his play, head coach Adam Gase sees potential from first round rookie safety Minkah Fitzpatrick. “He’s a good player. He’s one of those guys that just seems to be around the ball, and he’s a good guy to have whether it be inside or the back middle, the down safety, it doesn’t matter.” Coach Adam Gase says, “He’s going to find a way to get to the ball and he knows what to do. He’ll probably have an occasional rookie mistake, but I think the more he plays the better he’s going to get, and we’re glad we have him on defense.” 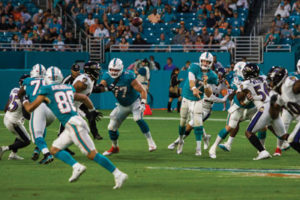 Ryan Tannehill threw for 115 yards, completing 11/16 passes and a touchdown. Danny Amendola caught the touchdown pass. “Guys are flying around, playing hard and we’re communicating well. We had some explosive plays. We definitely have some things to clean up. We’ll get on the field and watch that. Continue to grind and continue to get through this preseason and get ready.” Danny says. The Dolphins offense stalled in the second half. Once the Ravens started to get going, they couldn’t respond and put 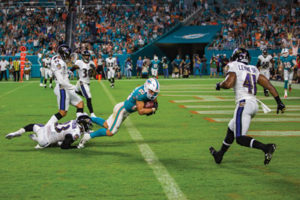 points on the board.  Head Coach Adam Gase sums up perfectly what the offense’s two halves looked like with his postgame quote. “It was a slow start for Ryan (Tannehill). I thought once we got that completion to (Kenyan) Drake, we got going a little bit better. I thought David (Fales) had one good drive. The ball was coming out quick. We were doing the right stuff and then after that, it was chaos. We were having all kinds of protection issues. We weren’t on the right guys, and we had some issues with the snap count as well.” The Dolphins have one more pre-season game, and their first regular season game is Sept. 9. Between now and then there is still some cleaning up to do. I still believe the Dolphins can turn things around in time for the regular season against the Titans.

On a cold, wintry Sunday afternoon in Green Bay, the Dolphins could not escape with a victory. At no point in the game could the Dolphins grab a lead nor score a touchdown. The final score was 31 to 12. […]

Another year, another successful event. The Miami Dolphins Youth Programs hosted over 1,300 student-athletes over the weekend. It was for their 9th annual Dolphins Academy Youth High School 7-on-7 Tournament. The three-day event kicked off on […]

Dolphins Win Thriller on Sunday: are they Still Alive?

Sunday afternoon, the Dolphins pulled out a stunning, improbable win against the rival Patriots […]