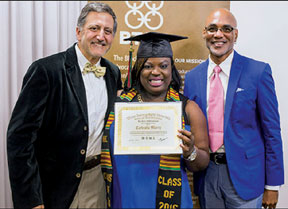 Jeffrey Klausner, M.D., Professor of Medicine, Division of Infectious Diseases and the Program in Global Health, UCLA; Murry-Anderson and Phil Wilson, president and CEO of the Black AIDS Institute.

One in a series about recent graduates of the African American HIV University (AAHU).

When Carleisha Murry-Anderson was a sophomore at the University of Arkansas at Pine Bluff, she decided to become a campus HIV peer educator, talking to students about their sexual health. Trained through the AIDS Education and Training Centers—a national network of leading HIV experts who provide locally based, tailored education, clinical consultation and technical assistance to healthcare professionals and healthcare organizations—Murry-Anderson found the students to be very receptive.

“They were more open to talk to their peers—someone their own age who they could identify with and who was knowledgeable. We talked to them about their sexual risk; we passed out condoms and promoted testing,” she says. That rewarding experience made Murry-Anderson, a mass communications major, become interested in public health. Since then the 31-year-old has devoted herself to the fight against HIV.

Once she graduated from college, Murry-Anderson began working as a case manager for the Jefferson Comprehensive Care System (JCC), which pro-vides primary healthcare and social services in the Pine Bluff area, including for people living with HIV/AIDS. As one of the youngest employees in the JCC’s Ryan White HIV/AIDS Pro-gram Part D—the group that focuses on HIV-positive women, infants, children and youths—she was granted the opportunity to go back to her college to assist in training HIV peer counselors.

Murry-Anderson learned a lot during her time with the Ryan White program and JCC—from going to trainings to working with people who had been in the field for 10-20 years to working with consumers, she says. “I learned about the life cycle of HIV, how to work with families and specifically how to work with youth. I had to engage and recruit young people to come to the facility for care.”

After three years Murry-Anderson also became a community liaison, where she continued to do case management for the Ryan White program but also conducted outreach, educated people, linked them to care, facilitated support groups for PLWHA and enrolled clients into the program. She became a certified HIV tester in Arkansas, too.

In 2015 a friend and former co-worker forwarded Murry-Anderson an email about AAHU. “He said it would be a good program for me and suggested I talk to one of the Arkansas AAHU graduates for insight,” she says. But first she conducted her own research, and after dis-covering that she’d have to go to Los Angeles for a 30-day boot camp, Murry-Anderson, the mother of a 6-year-old son, said no way. However, after doing some more research and reaching out to the AAHU grad her friend mentioned, she began to reconsider.

“The Fellow and I discussed all of the information and the knowledge she gained and how it helped her with her clients, outreach and going into the community,” Murry-Anderson recalls. “She shared with me some of the information. That motivated me to apply.” And thanks to video apps and social media, she was able to talk to her son daily.

The training proved to be one of the best experiences of her life. “I have learned so much about transmission, PrEP [pre-exposure prophylaxis] and breaking stigma that I am able to deliver to my community,” she says.

Today Murry-Anderson works for the Arkansas Autism and Developmental Monitoring Program, a public health surveillance position with the University of Arkansas at Medical Sciences. Her love and passion for HIV remain strong. She conducts HIV research, testing and other activities for various HIV programs in Arkansas as a volunteer.

Whether it’s educating people about HIV risk factors, reduction, testing or linkage to care, Murry-Anderson wants to remain involved in the field. “The moment I started working in HIV, it captured my heart and I knew that I wanted to help people,” she says. “Wherever my career or my life takes me, or whatever plans God has for me, I know that I will always be a part of the fight against HIV.”