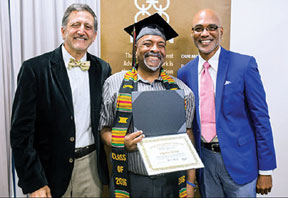 Jeffrey Klausner, M.D., Professor of Medicine Division of Infectious Diseases and the Program in Global Health, UCLA; Ouinton Stroud and Phil Wilson, president and CEO of the Black AIDS Institute.

Thirty years ago, Quintin Stroud was fearful. He had just been diagnosed with HIV and was afraid to seek medical treatment because everyone he knew who had taken the antiretroviral medication azidothymidine (AZT) had ended up dead. He didn’t trust the medication at all. It wasn’t until years later, with the encouragement of his friends, that he finally went to see a doctor.

Today Stroud is healthy and thriving and urges anyone newly diagnosed with HIV to get medical care immediately. “I tell them that they can live a long, productive life,” he says. “And don’t give up on any of your dreams.” He certainly has not given up on his.

Now 53, Stroud has dedicated his life to fighting HIV/AIDS, but the road was far from easy. In addition to being HIV positive, Stroud had been addicted to drugs, and left his job as a millwright at the Ford Motor Co. after 12 years. “I had developed behavioral issues with addiction and tried to figure out what to do next with my life,” he says. Stroud got clean and started volunteering in the infectious-disease clinic at Wayne State University in Detroit. There, he helped develop the community advisory board and the peer navigator program.

Eventually Stroud got a full-time job as a peer navigator at the Wayne State University Physician Group, where he worked in the infectious-disease clinic, talking both to newly infected HIV patients and people who had been living with HIV longer and were having medication-adherence problems.

A Sense of Purpose and Urgency

It was during his tenure at Wayne State that Stroud came across information about AAHU and the Black AIDS Institute. “I suggested the training to our clinical supervisor, but at the time we had a funding restriction and we didn’t think we could do it. A few years later, they asked me if I had ever heard of AAHU, and they handed me some literature about it,” he remembers. “I said yes and pulled up the email that I sent to them two years ago about the program. So they decided it was finally a good idea, and I applied.”

Completing the training was life-altering for Stroud. “AAHU changed me. It was really amazing. There was so much information in the boot camp about understanding the disease. I to an in-depth look at the systematic problems Blacks have with health disparities,” he says. “We had some concrete evidence-based information to bring back to our communities. We learned how to talk to people when they start spewing off crazy myths and give them the facts! That was really helpful.”

Stroud also realized AAHU’s significance. “As I went through it, my sense of purpose and the urgency for more people to go through this program became more evident,” he says. “AAHU is important for the Black community because we do not have enough trained leaders or people who understand the science and have some type of credential behind them that gives them some validity.”

In March 2016, after eight years at Wayne State, Stroud left to become a peer-support specialist at Adult Well-Being Services (AWBS), a non-profit whose work enhances the health and wellness of people of all ages by advocating for them and providing comprehensive services, as well as family and community support. AWBS has an integrated-care clinic onsite and helps people with mental-health issues, those who need substance-abuse treatment and the developmentally disabled.

Stroud, who is also a certified recovery coach, works on the AWBS Collaborate and Prevent HIV program, where he does testing and counseling and provides information about HIV and hepatitis C.

He is thankful for his AAHU training and credentials and plans to advance within the HIV/AIDS field. In five years he hopes to have a local BTAN chapter up and running. “I would like to work on housing needs for people who are HIV positive and provide more education to the community about the truth about HIV and about PrEP [pre-exposure prophylaxis]. We really need to have more conversations about PrEP.”