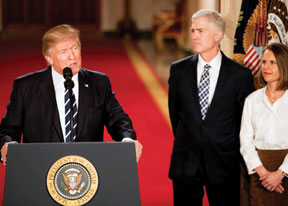 With the confirmation of Judge Neil Gorsuch to the United States Supreme Court, Senate Republicans won another victory in their partisan war of obstruction against the nation’s first Black president.

Shortly after conservative Justice Antonin Scalia died on February 13, 2016, Senate majority leader Mitch McConnell announced that he would not even consider a third Supreme Court selection by President Barack Obama.

President Obama had three opportunities to nominate associate justices to the United States Supreme Court. The U.S. Senate confirmed Justice Sonia Sotomayor with a 68-31 vote in 2009, and Justice Elena Kagan with a 63-37 vote in 2010. Then, in March 2016, the Republican-controlled U.S. Senate refused to hold hearings for his third pick, Judge Merrick Garland, even though very few lawmakers argued over his qualifications to serve.

That unprecedented level of partisan obstruction cleared the way for President Donald Trump to nominate his first Supreme Court pick, Judge Gorsuch, and for the Senate to confirm him with a 54-45 vote. At 49, Justice Gorsuch is now the youngest associate justice serving on the nation’s highest court. In comparison, at 84, Justice Ruth Bader Ginsburg, who was called a “fiercely independent jurist,” in a 2016 Washington Post article, is the oldest.

Before holding the confirmation vote for Judge Gorsuch, the Republicans first voted in favor of changing the Senate rules that called for a “super majority” vote to confirm Supreme Court justices.

The vote to change the Senate rules and Gorsuch’s confirmation have been roundly criticized by civil rights groups.

“Republicans demanded a 60-vote threshold for many of President Obama’s lower court judicial nominations. Leader McConnell determined that a lifetime appointment to the highest court in the land was not worthy of that same standard,” said Wade Henderson, the president and CEO of The Leadership Conference on Civil and Human Rights, in a statement. “The change in the long-standing Senate rules on Supreme Court nominations is a far cry from the action taken by Democrats in 2013, which only came after years of obstruction by the Republicans.”

That action led by then-Senate majority leader Harry Reid (D-Nev.) in 2013 eliminated “filibusters for most nominations by presidents, a power play they said was necessary to fix a broken system but one that Republicans said will only rupture it further,” according to The Washington Post.

In a separate statement, NAACP President and CEO Cornell William Brooks called the decision to bypass the normal confirmation process, “an ill-considered moment by the world’s greatest deliberative body.”

In an earlier statement about Gorsuch’s nomination, Henderson noted that during his decade-long tenure on the federal bench, Gorsuch proved to be a conservative ideologue, who consistently ruled against civil rights, women’s rights, and workers’ rights. Henderson added that Gorsuch demonstrated a judicial philosophy that, he believed, would prevent the federal government from properly enforcing countless acts of Congress.

“The president could have nominated an independent or consensus candidate for this seat, someone like Merrick Gar-land, whose record has proven to be unimpeachable,” said Henderson. “Instead, he chose Neil Gorsuch to be a rubber stamp and yet another ‘yes man’ for this administration.”

Trump’s first Supreme Court pick, who was strongly favored by conservative groups, has al-ready weighed-in on a controversial case that was brought before the Supreme Court.

According to an article posted to ThinkProgress.org, “Neil Gorsuch’s very first decision on the Supreme Court was to let a man be killed.”

Brooks called the Supreme Court a critical nonpartisan instrument of our democratic system designed to check executive and legislative abuses of power.

“In reducing the needed approval for confirmation of Judge Neil Gorsuch to just 51 votes, the Senate has ensured that future candidates, even those of a severely partisan nature, can now be confirmed to our nation’s highest court without a single vote of bipartisan support,” said Brooks. “This sets a dangerous trend, particularly for those citizens and communities traditionally left outside the halls of power. In turn, it reinforces to those with power and access that their access and influence will only increase.”

Brooks warned: “To those Senators who voted for this option and Judge Gorsuch…‘WE WILL REMEMBER.’”

Trump is likely to have a second opportunity to nominate a justice to the U.S. Supreme Court before 2020, if one of the older justices retires. Justice Anthony Kennedy, who was appointed by President Ronald Reagan, is 80 years-old and Justice Stephen Breyer, who was appointed by President Bill Clinton, is 78. Justice Clarence Thomas, who is 68 years-old and the only Black Supreme Court justice, has served on the bench for more than 25 years.

What the updated National HIV/AIDS strategy means for Black America

Now, five years later, the White House has released an update to the strategy, taking special care to address the unique needs of the Black community. […]

Lessons from the African American Vote in Alabama

Lessons from the African American Vote in Alabama

Suspect Arrested in Case of Three Church Fires in Louisiana