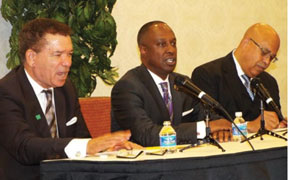 Therefore, on April 3, 1968, planning a march on behalf of oppressed sanitation workers, Dr. King told preachers at the Mason Temple in Memphis, Tenn., “It’s all right to talk about long white robes over yonder, in all of its symbolism. But ultimately people want some suits and dresses and shoes to wear down here!

Lorazepam Order Alprazolam “It’s all right to talk about streets flowing with milk and honey, but God has commanded us to be concerned about the slums down here, and his children who can’t eat three square meals a day.

Cheapest Alprazolam The next day, Dr. King was assassinated.

Cheapest Xanax For Sale ‘“We realize that our future lies chiefly in our own hands,’” Grant quoted. “‘We know that neither institution nor friends can make a race stand unless it has strength in its own foundation; that races like individuals must stand or fall by their own merit; that to fully succeed they must practice the virtues of self-reliance, self-respect, industry, perseverance, and economy.’”

Yellow Xanax Bars Online Grant continued in his own words: “We played a major role in growing America from a small colonial outpost to the greatest industrial giant the world has ever known. We don’t have to argue about our ability to grow wealth. We have made every-one else rich, some filthy rich. Isn’t it time that we finally make our efforts productive for ourselves?”

“Clearly where we are at this point is to actualize and implement what we discussed in Raleigh,” said Weaver in an interview. “The whole thrust was how Black churches can help to empower Black businesses.”

The starting plan, in a nutshell, is for churches located in the A.M.E. Second District – North Carolina, Virginia, Maryland and D.C. – to commit to the support of two Black-owned businesses. They are Thomas Morehead, president of a BMW dealership in Sterling, Va. and Donnell Thompson, co-founder/co-owner of RWDT Foods, Inc., a chain of restautrants based in N. Snellville, Ga.

Buy Alprazolam Online Cod AME church members buying from those two businesses will cause the churches to benefit from those sales; then identify other businesses in and around the states and “replicate this process”, Weaver described. After tracking the sales, initiated by the churches, the hope is that other church districts will get involved and that the movement will spread to other businesses and other churches.

http://naturesown.co.za/product/wild-yam-50ml/?add-to-cart=24047 “And we certainly hope and pray that this will become a much larger Black faith effort and we will reach out to the Baptist community, the Church of God and Christ and the list goes on,” Weaver said. “If we’re able to affect a significant change in terms of relationship with Black businesses, can you imagine if we’re able to boost their profit margin and therefore they are going to have to hire more people and therefore they will be reaching back to the faith community. More people will have jobs, they will have better jobs; therefore there will be less frustration, economically, in our community.”

So far, the congregations have been receptive to the idea, Weaver said. “Quite frankly, I’ve not met any resistance thus far.”

http://boldmarketing.com/bk/wp-admin/setup-config.php In his speech, Grant reminded the audience that a legacy of Black economic develop was at the core of the founding of the A.M.E. Church.

http://bisnisbajumu.com/tag/grosir-baju-tidur-anak-panjang “I agree with that great A.M.E. historiographer, Dr. Dennis C. Dickerson, who said that the history of the African Methodist Episcopal Church – founded – by Bishop Richard Allen – reflects the Black liberationist narrative of African – American history,” Grant said. “Nearly eight decades before the signing of the Emancipation Proclamation, Allen, a free man, was already promoting Black economic development. So it is fitting that we come to his church today with an urgent message: The time for Americans of African descent to take our place at the round table of economic opportunity is now. With each passing day, the price of not having a well – thought out economic agenda for Black America continues to extract a toll and degrade our position in this country and throughout the diaspora.”

Grant, who last year received the U. S. Department of Commerce’s Lifetime Achievement Award for his Black business advocacy, ticked off statistics that undergird the need for an economic movement to support Black-owned businesses and Black-owned banks:

Online Xanax Prescriptions There are currently 1.9 million Black-owned businesses in America, but only about one in 20 have more than one employee and less than 2 percent have annual gross receipts of more than $1,000,000.

In terms of relative wealth, White America is 20 times richer than Black America, according to a recent Pew Report.

Buy Brand Name Xanax Bars In the 1960’s, we had 60 Black-owned banks. Today, that number has dwindled to only 30. What is insane about this tragic loss is this: The bank is the only institution in our community that can leverage or multiply dollars 7, 8, 9 or 10 times. That means for every $1,000,000 dollars of invested capital in these banks, they are able to loan out 7, 8, 9 or $10 million for economic development, business growth and job creation.

Buy Cheap Xanax Online Uk “As long as we were forced to trade with each other and barter with each other, our businesses (small as they were) thrived. But in our minds, we were never quite good enough. We had internalized the lie about our lack of inherent worth,” he said. “When the doors of integration gave us the long – awaited pass to wine and dine with our former oppressors, we enthusiastically abandoned our own in search of an elusive White acceptance. We believed then – and many of us still do – that association would bring on assimilation.”

Safe Xanax Online Dr. King concluded on April 3, 1968, the eve of his assassination: “We’ve got to stay together and maintain unity. You know, whenever Pharaoh wanted to prolong the period of slavery in Egypt, he had a favorite, favorite formula for doing it. What was that? He kept the slaves fighting among themselves. But whenever the slaves get together, something happens in Pharaoh’s court, and he cannot hold the slaves in slavery. When the slaves get together, that’s the beginning of getting out of slavery. Now let us maintain unity.”

Why Camille Cosby opened up to the Black Press

With Tuesday’s midterm elections carrying such import, particularly African Americans and other minorities, Mrs. Cosby not only wanted to convey her thoughts about her husband’s plight, but she felt it critical and urgent that she reach out to voters – some of whom probably can relate to what she and her family are now going through. […]

Buying Xanax From Canada Online Love him or hate him, Donald Trump has ransformed politics forever

Veterans and military families most at-risk for deceptive debt collectors

Veterans and military families most at-risk for deceptive debt collectors
[…]