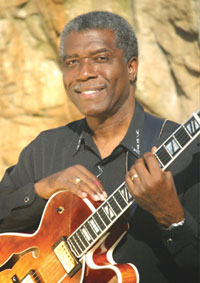 Jamician legend guitarist Eugene Grey will head line the 4th Annual of Music”  ”American Roots of Jamaican Music” Come enjoy it at the  Pompano Beach Cultural Center on Sunday, Aug. 26, 2018 at 7 p.m. This show chronicles the development of popular songs that were the foundation in both Jamaica and the Americas starting from the mid 1940’s to present time.  The event will also honor some of the legends of the genre with the presentation of the Jamaican Music Excellence Awards.  Tickets are $40 at www.ccpompano.org.

“Jamaican music has been a world-wide influence and through this Legacy event, we will take audience members on spectacular musical journey to experience the evolution of the art form,” said Felica Grey, President of “Rootz of Music.”

Special guest artist will be Sultan Ali, son of Prince Buster who recorded the classic song “Hard Man Fe Dead.” This innovative and entertaining musical presentation is staged to demonstrate the interconnectivity of American and Jamaican Music and how the two separate elements of two genres merged and became what is now known as Reggae and Hip Hop.

The event is sponsored in part by Broward County Florida Cultural Division as well as by SOS Children’s Villages, Greenspoon Marder Law, First Green Bank, David Photo, WAVS, Hot 105 and along with support from the City of Pompano Beach.

“Rootz of Music” was founded in 2011 by Jazz guitarist, arranger, composer, and music educator Eugene Grey and his wife Felicia K. Grey. The organization’s mission is to positively impact the social and academic success of children through music education and cultural enrichment performances and preserve the history of Jamaican music. Since 2013 “Rootz of Music” has provided weekly music lessons to SOS Children’s Villages, a foster care community.