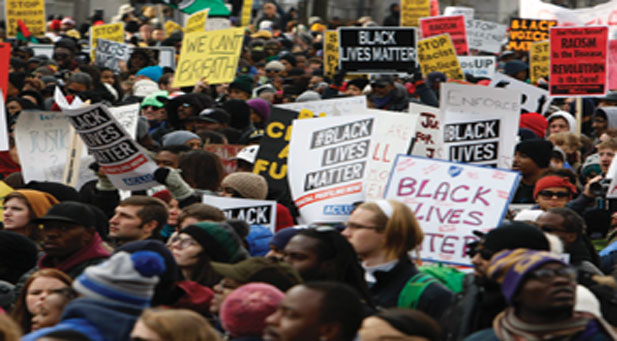 Americans take to the street to protest police killings

WASHINGTON, D.C. (NNPA) – On Saturday, thou-sands of Americans across the country registered their objection to police officers not being held accountable after killing unarmed citizens, many of them Blacks, by mounting massive demonstrations and rallies, the main one held here in the nation’s capital.

Organized by major civil rights organizations, the goal of the protest was to demand federal intervention in state prosecutorial systems that have failed to indict anyone in the police killings of victims such as Michael Brown, Eric Garner, Aiyana Stanley-Jones, and Pearlie Golden.

“We must have this nation deal with the fact that just like 50 years ago, the states have taken a position to rob the human rights and civil rights of citizens with states rights-protected laws,” said Al Sharpton, the rally’s chief organizer.

The demands by Sharpton included: expanding the powers for the Justice Department to investigate state prosecution procedures; national legislation to lower the threshold for grand jury indictments of police officers; and independent special prosecutors to examine potential cases of police brutality or misconduct.

The march drew a multiracial, intergenerational sea of sign-toting citizens from all over the nation.

Wanda Sharif, from Beaumont, Texas, had already been in Washington to help care for her grandchild, but extended her visit to attend the march. The grandmother of seven recalled marching with Dr. Martin Luther King, Jr. at 11 years old, and attending all-White schools until enrolling at Spelman College in Atlanta.

“I’ve been doing this for three generations. I have to be here to document for my grandchildren, so they know I was here,” she says. “It’s important that everybody sees – not just America, but the whole world should see that we have not made all the progress and accomplished all that we thought we did. More and more eyes are opening. We’re still fighting for the same things we were fighting for in the ‘60s.”

Washington D.C. residents Albert and Andrea Elliott brought their 12-year-old grandson, Jeremiah, to use the march as a teachable moment.

“I brought my grandson to his first march so he understands that what he is doing is right. We’re teaching him solidarity…and that he can speak up and be nonviolent without being afraid,” she says. “We as a people have to stick together and be more involved…. We have to go to the source, where the laws are made, to put our foot on their necks.”

“I’m here because I’m concerned about the future. If our grandparents went through this, and we’re going through this, Lord only knows what my grandchildren will go through,” says Davis, a member of Alpha Phi Alpha fraternity.

The light police presence blocked traffic and generally stayed out of the way as the loud but peaceful processional traveled six blocks to the main stage at the foot of the Capitol’s front lawn. Both national and international media were present, as well as union organizations, Black Greek letter organizations, civic and grassroots organizations, student groups, and families. Marvin Gaye’s ‘What’s Going On’ and ‘What’s Happening Brother’ met the marchers as they arrived at the main stage, where media trucks, government Suburbans, and a stilted press box overflowing with photographers flanked the crowds.

The lineup also featured the unexpected addition of a young contingent of Ferguson, Mo. protesters. At the gathering point before the march, where a different set of speakers addressed the crowd, about 15 members of the ad-hoc D.C. Ferguson group occupied the stage area, using chants and bullhorns to call attention to the fact that Ferguson protesters had not been invited as partners.

The group has been demonstrating since August, and was responsible for shutting down I-395 in protest last month.

Two DC Ferguson members and one Ferguson native and protester bypassed security and took to the stage. Security attempted to remove them without force. As the NAN speaker at the podium tried to speak over the commotion with calls for “respect for one another” and unity, Erika Totten, one of the D.C. Ferguson members onstage, used a bullhorn to say, “They have been out there for more than 100 days.”

After several minutes of heated exchange onstage between the contingent and several National Action Network organizers, the organizers allowed Totten to speak at the podium. She spoke very briefly then passed the microphone to St. Louis native and Ferguson protester, Johnetta Elzie.

“I’ve been in Ferguson for 127 days. I got shot one time with a rubber bullet standing on my neighborhood street. I’ve been tear gassed nine times in a neighborhood where I pay taxes, because I decided to exercise my First Amendment rights and go protest for the death of Mike Brown,” Elzie said. “This movement was started by the young people. We started this. It should be young people all over this stage.”

Afterward, an NAN representative approached the group and spoke to Totten about building an alliance.

At the main stage after the march, Rep. Green, Madison, and Sharpton addressed the discord between youth and grassroots actions, and those organized by civil rights leaders.

“We who are a little older, a little grayer, are proud of the young people speaking out,” said Madison, referring to youth protesters as young John Lewises and Fanie Lou Hamer, two civil rights legends.

Green echoed similar statements, adding that elders were not here to lead, but to “get out of the way.”

The Washington march was also the only one attended by the families of well-known unarmed Black male victims: Eric Garner, Michael Brown, Akai Gurley, Tamir Rice, John Crawford III, Lavar Jones, Cory Ball Jr., Trayvon Martin, and Amadou Diallo. All of the families were given time to speak.

“We’ve been here so many times. I know in 2000, when the four White officers were acquitted of killing my son, of all charges, I thought the world was ending,” said Kadiatou Diallo. Her unarmed son Amadou Diallo was shot 41 times by four New York Police Department officers in 1999. “…We said stop police brutality then. And today, 16 years later, we’re here demanding the same thing.”

After the march, traffic slowly reopened and the crowd mingled, making connections, walking back to chartered buses, and taking photos. Waiting for police to allow buses through, Washington resident Hassan Furtick encouraged his son to record the passing demonstrators and thank them.

“I don’t like [police shootings]. That could be mine. There’s no justice for us, but if it was one of theirs, there would be justice,” he said. He hadn’t talked to his son about the shootings, but ideas were already forming.

“People feel unsafe and not comfortable going outside. When there is an emergency you’re supposed to call 911. There’s no reason for people to have to feel unsafe,” says 11-year-old Hassan Furtick Jr. “Black people should not be living like this. People say Black people are not going to make it in life, and bad things will always happen to us, but we try to make it work. And we will keep trying.”

Many in the Greater Houston community are relieved to know that Jazmine’s killers have been apprehended and may soon face justice. However, the road to finding these suspects has been a real rollercoaster of high emotions and cloudy details. […]