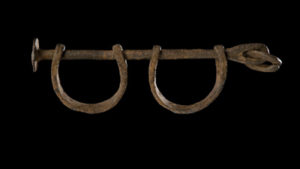 The arrival of the first captives to the Jamestown Colony, in 1619, is often seen as the beginning of slavery in America—but enslaved Africans arrived in North America as early as the 1500s.

In late August 1619, the White Lion, an English privateer commanded by John Jope, sailed into Point Comfort and dropped anchor in the James River. Virginia colonist John Rolfe documented the arrival of the ship and “20 and odd” Africans on board. His journal entry is immortalized in textbooks, with 1619 often used as a reference point for teaching the origins of slavery in America. But the history, it seems, is far more complicated than a single date.

It is believed the first Africans brought to the colony of Virginia, 400 years ago this month, were Kimbundu-speaking peoples from the kingdom of Ndongo, located in part of present-day Angola. Slave traders forced the captives to march several hundred miles to the coast to board the San Juan Bautista, one of at least 36 transatlantic Portuguese and Spanish slave ships.

The ship embarked with about 350 Africans on board, but hunger and disease took a swift toll. En route, about 150 captives died. Then, when the San Juan Bautista approached what is now Veracruz, Mexico in the summer of 1619, it encountered two ships, the White Lion and another English privateer, the Treasurer. The crews stormed the vulnerable slave ship and seized 50 to 60 of the remaining Africans. After, the pair sailed for Virginia.

As noted by Rolfe, when the White Lion arrived in what is now present-day Hampton, Virginia, the Africans were offloaded and “bought for victuals.” Governor Sir George Yeardley and head merchant Abraham Piersey acquired the majority of the captives, most of whom were kept in Jamestown, America’s first permanent English settlement.

The arrival of these “20 and odd” Africans to England’s mainland Ameri-can colonies in 1619 is now a focal point in his-tory curricula. The date and their story have become symbolic of slavery’s roots, despite captive Africans likely being present in the Americas in the 1400s and as early as 1526 in the region that would become the United States.

Some experts, including Michael Guasco, a professor at Davidson College and author of Slaves and Englishmen: Human Bondage in the Early Modern Atlantic World, caution about placing too much emphasis on the year 1619.

“To ignore what had been happening with relative frequency in the broader Atlantic world over the preceding 100 years or so understates the real brutality of the ongoing slave trade, of which the 1619 group were undoubtedly a part, and minimizes the significant African presence in the Atlantic world to that point,” Guasco explains. “People of African descent have been ‘here’ longer than the English colonies.”

Africans had a notable presence in the Americas before colonization

Prior to 1619, hundreds of thousands of Africans, both free and enslaved, aided the establishment and survival of colonies in the Americas and the New World. They also fought against European oppression, and, in some instances, hindered the systematic spread of colonization.

Christopher Columbus likely transported the first Africans to the Americas in the late 1490s on his expeditions to Hispaniola, now part of the Dominican Republic. Their exact status, whether free or enslaved, remains disputed. But the timeline fits with what we know of the origins of the slave trade.

European trade of enslaved Africans began in the 1400s. “The first example we have of Africans being taken against their will and put on board European ships would take the story back to 1441,” says Guasco, when the Portuguese captured 12 Africans in Cabo Branco—modern-day Mauritania in north Africa—and brought them to Portugal as enslaved peoples.

In the region that would become the United States, there were no enslaved Africans before the Spanish occupation of Florida in the early 16th century, according to Linda Heywood and John Thornton, professors at Boston University and co-authors of Central Africans, Atlantic Creoles and the Foundation of the Americas, 1585-1660.

“There were significant numbers who were brought in as early as 1526,” says Heywood. That year, some of these enslaved Africans became part of a Spanish expedition to establish an outpost in what is now South Carolina. They rebelled, preventing the Spanish from founding the colony.

The uprising didn’t stop the inflow of enslaved Africans to Spanish Florida. “We don’t know how many followed, but there was certainly a slave population around St. Augustine, founded in 1590 in part of a plan to fend off the British and French attempts at colonization of the region,” says Heywood.

Africans also played a role in England’s early colonization efforts. Enslaved Africans may have been on board Sir Francis Drake’s fleet when he arrived at Roanoke Island in 1586 and failed to establish the first permanent English settlement in America. He and his cousin, John Hawkins, made three voyages to Guinea and Sierra Leone and enslaved between 1,200 and 1,400 Africans.

Although not part of present-day America, Africans from the West Indies were also present in the English colony of Bermuda in 1616, where they provided expert knowledge of tobacco cultivation to the Virginia Company.

From an Anglo-American perspective, 1619 is considered the beginning of slavery, just like Jamestown and Plymouth symbolize the beginnings of “America” from an English-speaking point of view. But divorcing the idea of North America’s first slaves from the overall context of slavery in the Americas, especially when the U.S. was not formed for another 157 years, is not historically accurate.

“We would do well to remember that much of what played out in places like Virginia were the result of things that had already happened in Mexico, Central America, the Caribbean, Peru, Brazil and elsewhere,” says Guasco.

“The English took note of their fellow Europeans’ role in enslavement and the slave trade,” says Mark Summers, a public historian at Jamestown Rediscovery. In the context of the broader Atlantic world, the colony and institution of slavery developed from a chain of events involving multiple actors.

Still, U.S. school curricula tend to ignore much of what happened in the Atlantic prior to the Jamestown settlement and also the colonial projects of other countries that became part of America, such as Dutch New York, Swedish Delaware and French-Spanish Louisiana and Florida. “There is both an Anglo-centrism and east coast bias to much of traditional American history,” says Summers.

The arrival of a slave ship with a group of African slaves for sale in Jamestown, Virginia, 1619.

While Heywood and Thornton acknowledge that 1619 remains a key date for slavery in America, they also argue that focusing too much on the first enslaved people at Jamestown can distort our understanding of history. “It does so by failing to understand that the development of slavery was a gradual process, and that laws other than English laws applied,” says Thornton.

In 1619, slavery, as codified by law, did not yet exist in Virginia or elsewhere in places that would later become the United States.

But any question about the status of Black people in the colonies—free, enslaved or indentured servants—was made clear with the passage of the Virginia Slave Codes of 1705, a series of laws that stripped away legal rights and legalized the barbaric and dehumanizing nature of slavery.

As Guasco puts it, “The Spanish, Portuguese and English were co-conspirators in what we would now consider a crime against humanity.”