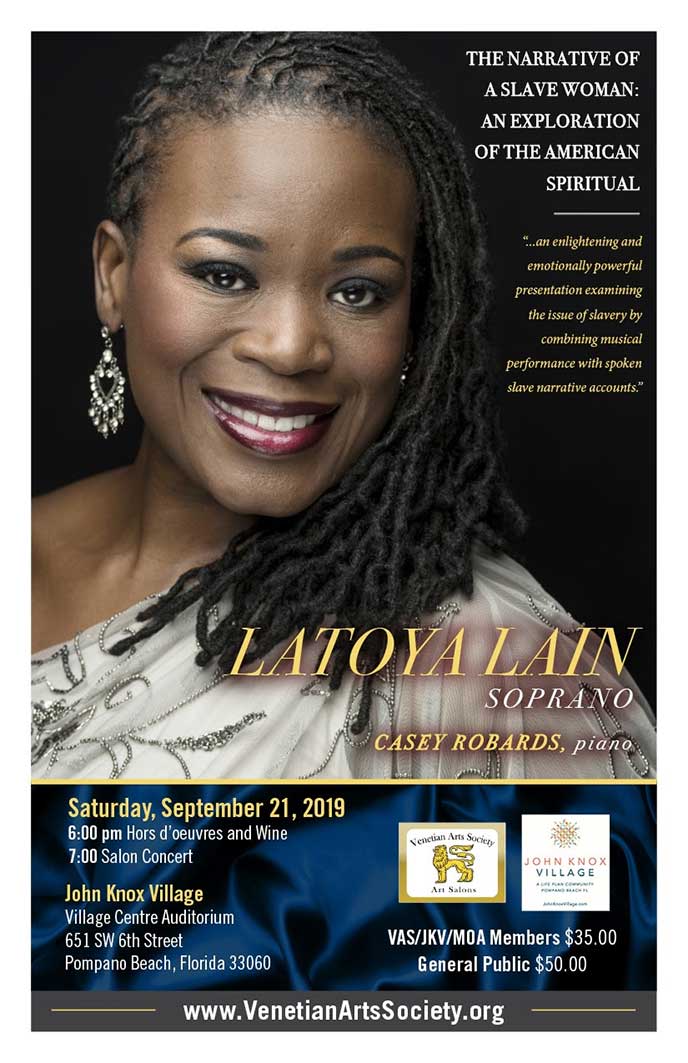 Equally at home in the teaching studio and on the performance stage, LaToya’s most recent engagements include performances of Gershwin’s Porgy and Bess at the Alte Oper in Frankfurt, Hamburgische Oper, and the Köln Philharmonie. She recently presented solo recitals at the American Church in Paris, the Dutch Reform Church in Harare, Zimbabwe, and at the Reapertura de la Iglesia Santa Teresa in Cochabamba, Bolivia. She also presented recitals and master classes at Oberlin College & Conservatory of Music, the University of New Mexico, University of Delaware, Murray State University, SongFest in Los Angeles and The International Congress of Voice Teachers in Stockholm, Sweden. She continues to sing opera, oratorio, and perform solo recitals throughout the United States, Europe, South America, and Africa.

In June 2017, she made her Carnegie Hall Debut as the soprano soloist in Ralph Vaughn William’s Dona nobis pacem, under the baton of Maestra Nina Nash-Robertson. She has also been a soloist in Mozart’s Requiem, Vivaldi’s Gloria, Verdi’s Requiem, Handel’s Messiah, Bach’s Magnificat, and St. Matthew’s Passion.
Ms. Lain’s operatic roles include “Brünnhilde” in Die Walküre, “Countess Almaviva” in Le Nozze di Figaro, the title role in Carmen, “Suzuki” in Madame Butterfly, “Polinesso” in Ariodante, “La Principessa” in Suor Angelica, “Baba” in The Medium, and “Ježibaba” in Rusalka.

Dr. Lain’s research includes the intensive study and performance practice of Negro Spirituals.  She has performed her lecture recital “Narrative of a Slave Woman: Songs of Hope, Justice, and Freedom” on concert stages and universities throughout the world.  Consequently, she was one of 57 experts invited to author a short chapter in The Voice Teacher’s Cookbook: Creative Recipes for Teachers of Singing, as part of a series addressed to various groups of musicians.  Her chapter is called “Delectable Diction and Dialect in the Negro Spiritual” and it was published this summer by Meredith Music Resources.

This season, LaToya held an Artist-in-Residency at the Shenandoah Conservatory, where she presented master classes and a solo recital in collaboration with The Juilliard School Head of Collaborative Piano and internationally acclaimed pianist, Margo Garrett. She was also featured in concert at the University of Minnesota, where she presented a joint lecture recital with famed composer, Libby Larsen.

Known for her musical sensitivity, collaborative skill and versatility, pianist Casey Robards has given recitals throughout the United States, Europe, Central and South America and Asia. Her repertoire includes art song, opera, musical theatre, gospel and popular vocal music, string, brass and wind chamber music, solo piano and new works. Dr. Robards is currently on the faculty of the University of Illinois. Previous faculty appointments include Indiana University, Oberlin Conservatory (postdoctoral) and Central Michigan University. As an alum of the University of Illinois Black Chorus, and after serving for several years as its principal musician/assistant conductor, Dr. Robards has twice been an invited faculty clinician for the Black Sacred Music Symposium, a biennial conference. At the Bay View Music Festival, Casey is Conductor/Head of Collaborative Piano for the summer opera programs and pianist/coach for the American Spiritual Intensive. In 2017, Robards served as associate music director of the University of Kentucky world premiere of “BOUNCE: The Basketball opera” co-produced with Ardea Arts and made her Carnegie Hall debut accompanying baritone Christiaan Smith in Top 40 radio hits reimagined as art song. Casey is interested in the intersection of music and social justice and has led benefit recitals for Musicambia, a non-profit organization that creates music conservatories in prisons. Dr. Robards has recorded projects of spirituals and various classical music works by underrepresented composers with singers Ollie Watts Davis, Angelique Clay, Henry Pleas, violinist Fangye Sun, and oboist, Sara Fraker. Robards attended the Tanglewood Music Festival where she received the 2004 Henri Kohn Memorial Award for most outstanding fellow. She has a D.M.A. in Vocal Coaching and Accompanying from the University of Illinois. Her dissertation on the life and music of John D. Carter (1932-1981) may be found online.

Venetian Arts Society (VAS), a not-for-profit tax exempt 501©3, is a membership-based organization that highlights the multi-cultural and inter-generational diversity of our community through a celebration of multi-disciplinary arts in intimate and interactive art salon settings. The goal is to synthesize the total artistic, social, and educational experience and to enrich the individual lives of all in our community through meaningful and purposeful artistic presentations…  evoking the vibrancy, energy, and sheer productivity that result when people of all ages come together.

The Venetian Arts Society 21st century version of the “Art Salon” is a performance-educational-social concept with a mission to unify our world by celebrating the multi-cultural and inter-generational diversity of our community through inter-disciplinary arts. Please join us for a complete artistic experience with food, wine, and stimulating conversation…where art compliments art. 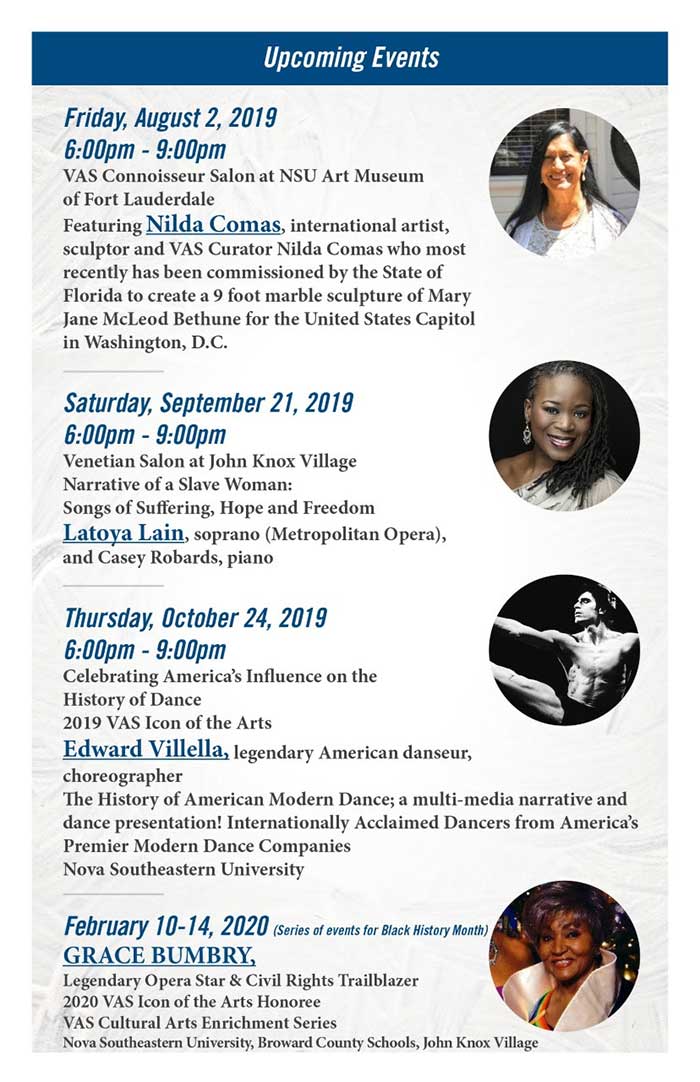