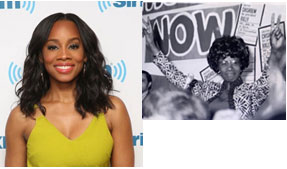 The politician was the first woman to run for the Democratic Party’s presidential nomination.

Roots and Tony-winning actress Anika Noni Rose has signed up for a groundbreaking role–African-American politician Shirley Chisholm. She will not star in the film, but serve as one of its producers.

According to Shadow and Act, Chisholm will “[embody] the keen sense of justice and community, embracing her fold like a warrior. Always meticulously dressed, pearls in place, watch adjusted to the second, Congresswoman Chisholm metamorphosed to do America’s business. With a colorful team of cohorts by her side, Chisholm personifies the bold educated Brooklynite with her roots firmly planted in her Caribbean heritage, hurdling humongous odds in a system structured for whites and males only.’”