No one should suffer critical injuries after a simple traffic stop. 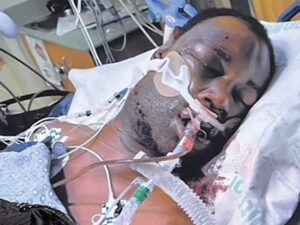 Nichols was pulled over Jan. 7 for reckless driving. Authorities say as the cops approached Nichols, a “confrontation” ensued and he attempted to flee. He was approached again by the officers who arrested him. Then, seemingly out of the blue, Nichols complained of having a shortness of breath and then an ambulance was called.

The police department said Nichols died after “succumbing to his injuries” —of which they didn’t specify and seemed to conveniently skip over how said injuries were caused in their press releases. Social media circulated an image of Nichols appearing beaten and bloodied in the hospital bed.

Just last week, Washington D.C. teacher Keenan Anderson was shocked repeatedly with a Taser by the LAPD during a traffic stop. He died four hours later at the hospital. Both Anderson and Nichols’ family were left with more questions than answers as to how a routine stop could turn fatal.

Civil rights attorney Benjamin Crump, who is representing the family, is asking for police to release video from the stop, saying in a statement that “all of the available information tells us that this was the tragic and preventable death of a young man.”

“Nobody should ever die from a simple traffic stop — the footage is the only way to discern the true narrative of why and how that happened to Tyre,” Crump said.

“You shouldn’t be on a dialysis machine, press machine, looking like this because of a traffic stop,” Wells told WMC.

The Memphis Police Department said they are taking disciplinary action against the officers involved following an internal investigation the day of the incident. The state bureau of investigation and Shelby County District Attorney’s Office were contacted to conduct a use-of-force investigation.