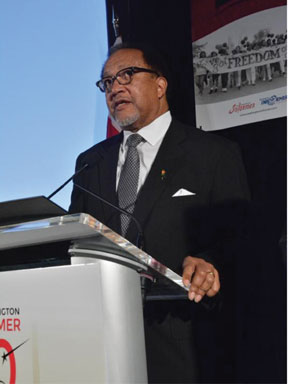 (TriceEdneyWire.com) – Civil rights leader Benjamin Chavis, now president of the National Newspaper Publishers Association (NNPA), says he envisions Black newspapers as becoming the “new mainstream” rather than an alternative press as it is often called.

“The Black Press, I believe has an opportunity where it can make even more traction than it has in the past,” Chavis said in a recent interview with the Trice Edney News Wire. “In other words, I don’t see the Black Press as a side press from the mainstream press. I want the Black Press to become the new mainstream because the demographics are changing.”

Chavis was among the speakers at a gala celebration for the 50th Anniversary of the Washington Informer Newspaper, published by NNPA member Denise Rolark Barnes. Black-owned newspapers are often called specialty, alternative or minority press by government agencies and corporate America.

But, according to an analysis of U. S. Census Bureau population stats, people of color, including African Americans, will gradually increase to become a clear majority of America’s population over the next four decades.

“All in all, minorities, now 37 percent of the U.S. population, are projected to comprise 57 percent of the population in 2060,” according to a U. S. Census report. “The total minority population would more than double, from 116.2 million to 241.3 million over the period.”

During that period, “the Black population is expected to increase from 41.2 million to 61.8 million” as the white population will peak in 2024 – 10 years from now – and then gradually decrease by 20.6 million by 2060, the Census reports.

Chavis sees this increase as a prospective boon for NNPA’s more than 200 Black-owned newspapers as it anticipates its 75th anniversary in 2015 – but only if certain strategies are put in place.

First, he said, the Black Press must focus on a stronger economic foundation by generating more revenue. African Americans spend $1.2 trillion a year, he said, noting that Black newspapers must partner with the Black Church, Black banks, Black colleges and Black organizations to network and support the Black Press.

This strategy would require much unity, Chavis says. “This is beyond connecting the dots. The dots have to converge …There’s too much disunity in our community. And I’m not just talking about organizational disunity. I’m talking about disunity even among the so-called personalities…In my long career in civil rights I’ve seen what happens when leadership goes in divergent paths…To me, it’s a disservice to our community to allow personality conflicts to get in the way.”

Secondly, white-owned businesses must be made to understand the value of supporting Black newspapers as businesses and as a sustainable institution, the same as the broadcast media, Chavis says.

“To reach people in our community. They can’t just look at something on TV or hear it on the radio and act. They’ve got to look at it and read it more than once. That’s the value of the Black print press,” he said. “The pen has to have an economic undergirding so that what is written gets distributed; so that what is written gets circulated. Sometimes we overlook the necessity to the strong economic foundation in our quest for freedom, justice and equality.”

Denise Rolark Barnes, who has been publisher of the Informer for 20 years, succeeded her now late father, Dr. Calvin Rolark, a prominent D.C. businessman and Black leader. Barnes recalls how the Black Press has led America’s media when it comes to many of the issues that have now emerged as headline news for white-owned media, such as police brutality, economic justice and voting rights.

“The more you do it, the more stories you realize need to be told; the more you realize that our community, our Black history every day is being thrown away,” says Barnes, in an exhibit hall showing historic front pages and photos from the Informer. “I’ve learned that history does repeat itself and is repeating itself.”

Hundreds of people packed into the Carnegie Library in Downtown Washington, D.C. to salute the Informer and its legacy during the event in late fall.

Iconic radio talk show host Joe Madison recalled how the Black Press has been so audience-specific that readers know that those who advertise in Black newspapers specifically want to reach Black people. “It means it’s for us,” Madison said.

Ben Chavis is one who has benefited tremendously from the Black Press. He is one of the historic Wilmington 10, who was pardoned by North Carolina Governor Beverly Perdue two years ago in a 1971 fire-bombing amidst the civil rights struggle. The pardon finally came after the Wilmington Journal of North Carolina, published by Mary Alice Thatch, escalated the campaign for justice.

Concludes Chavis, “It is in the business of not only re-porting the news, but defending the news when it comes to the interest of Black people. That’s what gives the Black press its unique value, not only to Black America, but to the rest of America.”

In five short years, the cable giant Comcast has achieved incredible success with its Internet Essentials program, connecting 750,000 low-income households to the power of the Web. […]

Is Trump Looking Out for American Workers?

This may seem strange, but there are apparently unions that feel that President Donald Trump’s policies on trade are in the interests of workers in the United States. I am a bit perplexed. […]

Blacks must be part of energy debate

Blacks must be part of energy debate
[…]