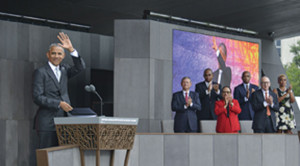 President Barack Obama waves to the crowd during the grand opening ceremony for the National Museum of African American History and Culture on the National Mall in Washington, D.C.  (Freddie Allen/AMG/NNPA)

The idea of erecting a museum that would highlight the contributions of African Americans first received public attention more than a century ago after Black veterans of the Civil War proposed the idea. But the real push occurred when Georgia Congressman John Lewis took up the mantle, securing the support of several of his colleagues. Finally, in 2003, then-President George W. Bush signed legislation that allowed the project to begin.

On Saturday, Sept. 24, with the ringing of a bell borrowed from the First Baptist Church of Williamsburg, Virginia, founded in 1776 and one of the nation’s oldest Black churches, President Barack Obama officially dedicated the newest addition to the family of Smithsonian institutions located on the National Mall – the National Museum of African American History and Culture (NMAAHC).

In his address, the president said that the museum was an essential part of America’s story.

“What we can see of this beautiful building tells us that it is truly a sight to behold. But what makes it special are the stories contained inside,” Obama said. “It is this national museum that will help tell a fuller story of who we are. The African-American story is not a sidebar or a secondary tale. No, it is central to the American story – a glorious story that illustrates how African Americans have been able to rise again and again from tragedy to triumph.”

Still, given the recent outbursts of civil unrest that have taken place in Charlotte, N.C. and Tulsa, Okla., following the shooting deaths unarmed Black men by police officers, the president also commented on what the museum cannot do.

“This museum won’t end job discrimination, violence in our cities or so many other ills and examples of injustice that we face – those things are up to us to change – by speaking out, protesting and voting,” he said. “Hopefully it will help us begin to talk to one another, really see one another and listen to one another.”

The president’s remarks served as the finale to a program attended by several hundred guests, many of whom were donors in a remarkably long fundraising initiative, led by Lonnie G. Bunch III, the founding director of the NMAAHC.

Meanwhile, as far as the eye could see, hundreds and hundreds of men, women and children lined the grounds surrounding the museum, watching the program on Jumbotrons, periodically shouting their affirmations throughout as participants including Stevie Wonder, Will Smith, Oprah Winfrey, Robert De Niro, Angela Bassett, Patti LaBelle and an acapella jazz choir from Howard University mounted the stage.

Bush, passionate in his remarks, shared one statement that elicited a roar of agreement from the crowd and which Obama would reiterate during his address.

“A great nation does not shy away from the truth,” Bush said, referring to the countless lessons that he believes the new museum, through its many artifacts and exhibits could provide to all Americans.

Ken Chenault, one of the NMAAHC advisory council members and the CEO and chairman of American Express, commented on the willingness of so many to answer the clarion call to raise the millions of dollars that were needed to start the museum project.

“I look at this building with a great sense of pride,” said Chenault. “Donors came from all across the planet – large donations and small donations – because so many people believed in the importance of building this museum. It will always remind us that what brings us together is stronger than what tears us apart.”

Bunch, overwhelmed with emotion, began his remarks by saying, “Today, a dream too long deferred is a dream no longer.”

Bunch continued: “This is not just about telling the story of a people, but a nation’s story and it will forever show how the lives of all Americans have been and will continue to be enriched, because of the contributions of African Americans.”

Black and Latinos working together

Black and Latinos working together
[…]