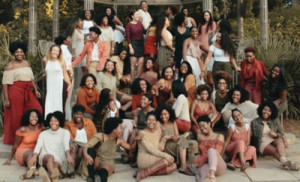 Without any doubts, Black women are the most beautiful creation. They have been used in modeling for an extended period.

For instance, we all know how actress Lupita Nyong’o looks stunning in her skin color and has grabbed a spot in the fashion world. But now try to imagine #BlackGirlMagic merging with #BlackExcellence.

From the looks of an epic photo-shoot, it’s apparent that Duke University’s Class of 2018 is boasting some incredibly beautiful and intelligent Black women.

A select group of ladies from the Duke University class of 2018 is already looking ahead to their big day, and they have heated up the Internet in the process.

The group, consisting of 46 ladies, created a buzz on the social media with everyone singing praises to the squad of educated young Black women set to graduate from the prestigious University in 2018.

That occurred after an image from a quick photo shoot went viral. The photo was initially shared by the sister of one of the students pictured, who couldn’t help but let the world view the magical melanated moment.

“I’m speechless, take a moment to look at my sister and her class of graduating Educated Strong Amazing Black Women from Duke University,” the sister wrote on Instagram. “I hope many young Black queens see these women as an inspiration, and encouragement to never let anybody tell them that you can’t do or become something remarkable in life.

The pic of these 46 sisters was shot by photographer Joseph W. Kim, a fellow Duke student who explained on his website that he has a passion for “telling the stories of people whose stories aren’t often heard.”

Four months ago, a group of sorority sisters from Florida A&M University went to the Costa Rican beaches to pose for a photo shoot celebrating Black beauty.

The sorority sisters also wanted to honor their 10th anniversary of joining the Beta Alpha chapter of Delta Sigma Theta, and sported nude bathing suits in a series of photos they

“Black women are often over-looked in beauty,” a member of the group told Yahoo Style. “This was our way to shine a light on all types of Black beauty. Our sorority is all about Black excellence, and we want to serve as an example and show appreciation of Black women.”

Hopefully, other young wo-men will look to magical melanated moment and be inspired that Black women are not only beautiful but also intelligent.

Situated on the east end of the Beale Street Entertainment District, the house is where a young William Christopher Handy lived at the turn of the century. A letter from the Downtown Memphis Commission (DMC) informed Turner that the operating services of Heritage Tours would not be part of the Handy home’s future. Heritage had been the operator for 24 years. […]

People with rare diseases, like sickle cell disease, have unique and complex challenges and the Pfizer partnership provides an opportunity for NNPA to inform and educate readers of Black-owned newspapers in more than 70 markets across the country on sickle cell disease, which NNPA President and CEO Dr. Benjamin F. Chavis, Jr., said is an often misunderstood disease that has a profound impact on the health and well-being of those affected. […]

What’s next after the marches?

What’s next after the marches?
[…]