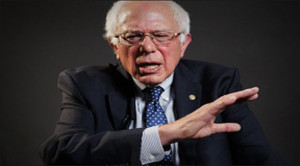 Bernie’s broken promise—Senator Bernard “Bernie” Sanders (D-Vt.), a candidate for the Democratic nomination for President of the United States in the 2016 election

HIV/AIDS advocates from across the U.S. expressed their frustration this week at the news that Presidential Candidate Senator Bernie Sanders has again indefinitely postponed a highly anticipated early May meeting with HIV community leaders.

In mid-March, 70 HIV/AIDS advocates sent letters to all 2016 Presidential candidates asking each of them to prioritize action to end the U.S. and global HIV/AIDS epidemics by:

* announcing a commitment to end the AIDS epidemic in the United States by 2025;

* supporting an increase in funding to the global PEPFAR program by at least $2 billion per year by 2020.

As a result of that outreach, 20 HIV/AIDS advocates representing organizations throughout the U.S. have a one-hour meeting with the Clinton campaign firmly scheduled for Thursday, May 12, in New York City. The now-cancelled 30-minute meeting with the Sanders campaign was slated for Tuesday, May 3, in Indianapolis. The commitments securing these meetings were due to on-going pressure from the HIV/AIDS community. In the six weeks since the letters to the candidates were sent, promises followed by silence and delays have been the rule, not the exception. In their initial responses, the Clinton and Sanders campaigns each proposed meeting with HIV community leadership during the April 20 New York primary, but confirmations never materialized. Only the threat of demonstrations at the Clinton and Sanders headquarters in Brooklyn on April 19, the day before the NY primary, yielded both promised May meetings.

The Clinton meeting has been confirmed for several weeks, but the Sanders meeting remains an elusive, moving target. On April 15, the Sanders campaign committed to meeting with 20 HIV leaders during “the first week of May” on a date and location to be decided later. Not until April 29, with only four days’ notice, did Sanders representatives set a 30-minute meeting to take place in Indianapolis on the morning of the May 3 Indiana primary. Attendees purchased expensive, last-minute airfares, only to be informed two days later, on April 30, that the May 3 meeting was cancelled. Despite another promise to “reschedule” as soon as possible, thus far the Sanders campaign has not proposed a new date, time, or city.

These delays and failures to make good on previous commitments by the Sanders campaign are becoming a growing concern for the 70 HIV/AIDS advocates who signed the mid-March letters to candidates. This size-able national coalition of LGBT and HIV/AIDS activists and organizations represent diverse, oft-marginalized communities, including many Sanders supporters who have already voted for or planned to vote for the Vermont Senator in a Democratic primary or caucus. Yet the group is unified in its disappointment, asserting that these ongoing broken promises are unacceptable and will not be taken lightly.

“The AIDS epidemic in Black America is a real and serious threat,” said Phill Wilson, President and CEO of the Black AIDS Institute. “I would suspect any candidate seeking the support and votes of Black Americans need to treat it as such. I am surprised that the process of arranging a meeting to speak about one of the most devastating health issues of our time has been so difficult to arrange with Senator Sanders.”

“AIDS activists have learned the hard way that patience costs lives,” said AIDS Foundation of Chicago Vice President of Policy & Advocacy Ramon Gardenhire. “‘SI-LENCE=DEATH’ was a reality in the 1980s, not just a slogan, with thousands of Americans dying while President Reagan ignored the new epidemic. As the AIDS crisis grew, politicians often said supportive things and then did nothing. True leadership requires action, not just empty words. Time and again, Senator Sanders has publicly vowed to show up and not back down even when a fight is an uphill battle. Now is the time for him to demonstrate that to the HIV community.”