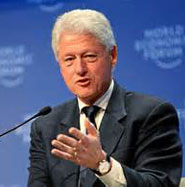 By Damon C. Williams, Special to the NNPA from the Philadelphia Tribune

The remarks came Wednesday in an address in Philadelphia at the 106th NAACP national convention.

“The President spoke a long time yesterday, and very well, about this criminal justice reform, and I appreciate what he has done,” Clinton said. “But, here’s what happened when I took office. We had had a roaring decade of rising crime – we had gang warfare on the streets. We had little children being shot dead on the streets who were just innocent by-standers standing in the wrong place. We had kids in Los Angeles doing drills in their schools to learn how to drop down and get under their desks because of people just doing random drive-by shootings. Violent crime had tripled in the previous 30 years and the police force had only increased by 10 percent.

“So we put 100,000 more police on the streets so they could be tighter tied to the community and we passed the Brady Bill and the Assault Weapons Ban which had an ammunition on the clip, as I remember, of about 10 bullets,” Clinton added. “And we passed funds to give people something to say yes to in the after school hours, not just to say no to. But in that bill, there were longer sentences. And most of these people are in prison under state law, but the federal law set a trend. And that was overdone.

Prior to Clinton’s address, NAACP Chairwoman Roslyn M. Brock said the former president “demonstrated his pragmatic leadership while in the White House” and said he looked forward to hearing Clinton “lend his perspective on some of the most important civil rights challenges” of our time.

“President Clinton comes to the NAACP’s 106th annual convention as not merely a humanitarian or a former president but as a friend,” Brock said. “Whether advancing civil rights nationally or combating human rights challenges globally, President Clinton has demonstrated the values of the NAACP over an arc of public service that is both long and wide.”

Clinton’s comments were in step with comments President Obama made during the President’s keynote address earlier this week.

“The statistics on who gets incarcerated show that by a wide margin, it disproportionately impacts communities of color; African Americans and Latinos make up 30 percent of our population; they make up 60 percent of our inmates,” President Obama said on Tuesday. “About one in every 35 African-American men, one in every 88 Latino men is serving time right now. Among white men, that number is one in 214. The bottom line is that in too many places, Black boys and Black men, Latino boys and Latino men experience being treated differently under the law.”

“And one of the consequences of this is, around one million fathers are behind bars. Around one in nine African-American kids has a parent in prison,” President Obama said. “What is that doing to our communities? What’s that doing to those children? Our nation is being robbed of men and women who could be workers and taxpayers, could be more actively involved in their children’s lives, could be role models, could be community leaders, and right now they’re locked up for a non–violent offense.”