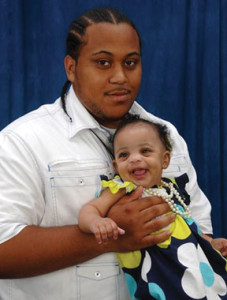 Mother of Black man killed by K.C. cops seeks to clear his name

WASHINGTON, D.C. (NNPA) – These days, all Narene Stokes wants to do is clear her son’s name and gain some closure. In the two years since Kansas City, Mo. Police Department officer William Thompson ended Ryan Stokes’ life with four bullets, both media and police reports have described Ryan as a thief and an armed suspect.

“At first… we got asked a lot, ‘Well, did he have a gun? You know, was he down there stealing?’” recalled Narene. “Ryan did nothing of the sort of what they put in their story. I could see he was going to be a great man, a father, an uncle, a true brother. Ryan was a good guy.”

Ryan, 24, was enjoying the nightlife with friends at Kansas City’s Power & Light entertainment district. As the bars began to close, people flowed into the streets. Police officers were already in place, attempting to disperse the crowd.

A group of young white men stepped into the crowd, and one discovered his phone was missing. He accused Ryan Stokes’ childhood friend, standing nearby, of stealing it. A scuffle ensued, and a bystander captured part of it on video. In the video, Ryan seemed to be separating the men – until a tear gas canister was fired into the crowd.

People scattered, and the men pointed Ryan out to a police officer. Meanwhile, Ryan’s designated driver had caught a faceful of the gas. He handed Ryan his car keys to get the car.

There are different accounts of what happened next.

According to police, Ryan and his childhood friend were chased to the parking lot. The friend was ordered to the ground and handcuffed; at the same time, Ryan pulled a gun on the officers and ignored commands to drop it, forcing Officer Thompson, who is Black, to shoot.

“I have read the police officer’s statements about what happened,” said Cyndy Short, the family’s lawyer. “The investigation as recorded in the report about the shooting is very underwhelming, underdeveloped. Even the officers are inconsistent about whether or not commands were given.”

Short and several witnesses said that police did not get Ryan’s attention – if they did issue commands, he did not seem to hear them. Addition-ally, an off-duty officer from a nearby suburb saw Ryan walking to the car, and said he neither heard officer commands, nor saw a weapon. Everyone agrees that Ryan’s childhood friend was arrested. According to Narene, he watched Ryan fall to the ground a few feet away, then spent at least a month in jail.

The medical examiner declared Ryan’s death a homicide. Less than a week later, a grand jury ruled it justifiable. A year later, Officer Thompson and his partner Tamara Jones were a-warded a certificate of commendation for “ending the threat.”