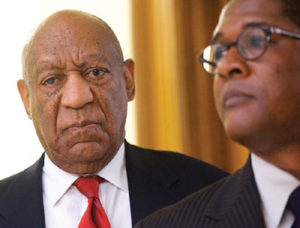 Judge Steven T. O’Neill ordered Cosby to get written permission from adult probation officials, if he wants to leave his Philadelphia area home to visit his doctor or to meet with lawyers.

Those are the only movements he’s allowed, and they must be within a five-county radius of Montgomery County. Cosby has been fitted with a tracking device, so that court officials can monitor him.

“This was a man who had evaded this moment for far too long,” Montgomery County District Attorney Kevin Steele said after the verdict.

Steele said that Cosby had “shown his true colors,” when the legendary actor called the prosecutor an “a—hole” after Steele argued that he should immediately be locked up following the verdict.

O’Neill ruled that Cosby could remain free on the same $1 million bail he posted when he was arraigned in December of 2015.

“We still believe that Mr. Cosby is innocent of these charges,” lead defense attorney Tom Mesereau said. “The fight isn’t over.”

About an hour after the verdict and before Cosby left the courthouse, several of his defense team members huddled, including attorneys Jaya Gupta and Rachael Robinson, both sobbing.

An emotional Andrew Wyatt, Cosby’s chief spokesman, said the trial was reminiscent of Emmett Till, the 14-year-old Mississippi African American whose lynching after he was accused of whistling at a White woman, ignited the Civil Rights Movement.

“This became a public lynching,” Wyatt said. “What Gloria Allred was able to do, she took a salt and pepper shaker. She [shook] out a lot of salt and sprinkled in a little black pepper and the South came east.”

Ebonee Benson, who joined Wyatt on morning television shows after the verdict, said the comparison to Emmett Till is real.

“We can take a look at Emmett Till,” she said. “Since when are all women honest?”

Lawyer and famed CNN legal analyst Joey Jackson, who before the verdict said the case should have been declared a mistrial, said after the decision that Cosby’s team has “many grounds for appeal.” He said he was stunned by the verdict as well as the swiftness in which the jury delivered it.

“Certainly, the prosecution put up vigorous case … but I thought the defense did a significant job of discrediting Andrea Constand giving the jury an indication that there was a number of lies she told over a period of time,” Jackson said.

Jackson continued: “The first trial took them 52 hours and they were hung. This time it took 15 hours and they convict, so here we go. I think the most significant grounds were the five accusers. In the first trial, there was one and when you have five, they just have such prejudicial value and I think it just overwhelmed the jury. That’s probably the biggest point in attempting to get Bill Cosby a new trial.”

Jackson called the issue “significant” and one that might allow Cosby, whose facing 30 years in prison, to remain free through the appeal process.

This article was originally published on BlackPressUSA.com.

Human clinical trials are up next for experimental HIV vaccine

According to U.S. researchers, an experimental HIV vaccine protected animals from dozens of strains of HIV and a human trial of the vaccine is expected to begin in the second half of 2019.   […]

Where is Black political leadership in America in 2017?

Where is Black political leadership in America in 2017?