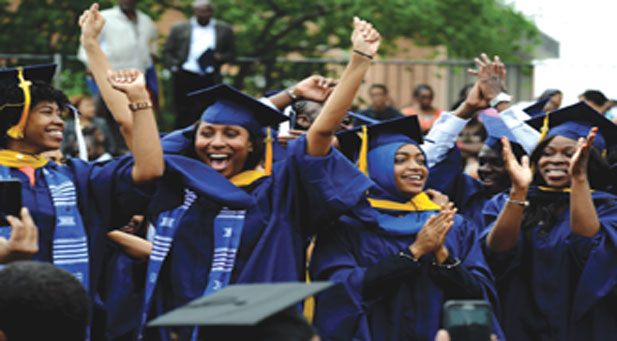 WASHINGTON, D.C. (NNPA) – College graduates will enter a job market this year that is better than it has been in recent years, but they will still face a tough climb. That climb will be especially difficult for Black college graduates who will grapple with a jobless rate that is still in the double digits, according to a new report by the Economic Policy Institute (EPI), a Washington, D.C.-based research and education group focused on low- and middle income workers.

Alyssa Davis, a research fellow focused on the labor market, poverty and education; Will Kimball, a research assistant with EPI; and Elise Gould, director of health policy research co-authored the report for the Institute’s “Raising America’s Pay” research and public education initiative.

“Things are starting to look up for young grads, but we’re not quite where we want to be yet,” said Davis.

Even though, the unemployment rate for Black college graduates improved to 11.4 percent, it is still nearly three points higher than it was in 2007 (8.1 percent) before the Great Recession. The jobless rate for white college graduates has peaked at 9 percent in 2011, and the current unemployment rate at 5.8 percent is less than a percentage point from the 2007 rate of 5.1 percent.

“This suggests other factors may be in play, such as discrimination or unequal access to the informal professional net-works that often lead to job opportunities,” stated the report.

Increasing college costs coupled with mountains of student loan debt may also make it harder for students to stay in school to earn advanced degrees.

“The cost of higher education has risen faster than typical family incomes, making it harder for families to pay for college,” stated the EPI report. “From the 1983–1984 enrollment year to the 2013–2014 enrollment year, the inflation adjusted cost of a four-year education, including tuition, fees, and room and board, increased 125.7 percent for private school and 129.0 percent for public school.”

Meanwhile, the median family income rose less than 17 percent over the same period.

Over the past decade (2004-2014), the number of borrowers has increased more than 90 per-cent and the average debt per borrower increased by 74 per-cent, according to the EPI re-port.

Those who can’t afford college are forced to compete in a weak labor market with older more experienced workers.

More than 23 percent of Black high school graduates fall into the gap between having a job and going to college, com-pared to 14.2 percent of their white peers.

“When you have a period of sustained economic weakness like this and you have these lower wages, and you have all of these people idle, it can affect their jobs opportunities and earnings for up to a decade into the future,” said Davis.

Researchers suggested that because the majority of workers aged 17-24 years-old have less than a college degree, including more than 90 percent of Black workers; policymakers need to focus on providing them with access to good jobs and stable employment that “allows them to build a career or pay for further schooling.”

Kimball also agreed that high school graduates that didn’t have jobs lined up could benefit from President Barack Obama’s plan to provide students with two years of free tuition at a community college.

Nearly half of college graduates younger than 27 years old are still working jobs that don’t require a college degree and those jobs “are of lower quality now than they used to be,” the report said.

Gould said that, on the individual level, it may or may not be a good investment for people to go to college, because of increasing college costs and flat wages.

Ultimately, the EPI report found that the down economy affects young workers in many of the same ways that it affects older workers and because the causes of their job struggles are the, same so are many of the solutions.

Researchers said that targeted jobs programs and investments in infrastructure would drive the economy toward full employment.

Kimball said that there are plenty of labor standards that policymakers can work on that can boost the bargaining power that workers have, including raising the minimum wage, updating the overtime salary threshold and ensuring greater access to paid sick and parental leave for workers.

“When we raise the minimum wage it usually translates to wage growth for everybody,” said Davis.

Kimball added that a minimum wage increase would also help those that are working their way through college.

Gould said that the idea that millennials are choosing to sit on the sidelines, complaining about not getting the job that they want, is misguided, because recent graduates are entering the labor market with an economy that is still recovering from a historic recession.

“[Millenials] are likely to fair poorly in the labor market and that is going to have long-term effects for them,” said Gould. “Things have improved from the depths of the Great Recession, but for young workers, it’s still going to be slow going.”

The Greater Fort Lauderdale Chapter of Jack and Jill of America, Incorporated turns 50!

The Greater Fort Lauderdale Chapter of Jack and Jill of America, Incorporated turns 50!
[…]

Should Blacks in Florida be Democrats, Independents, or Republicans?

Should Blacks in Florida be Democrats, Independents, or Republicans?
[…]