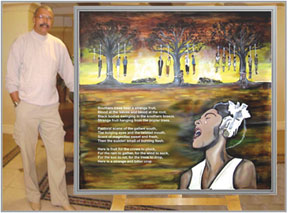 Black Lives Matter’: Artist protest— “Strange Fruit” © created by Oakland, Calif., artist Lawrence Jones, and the original size is 76” x 76”, acrylic on canvas.  This painting displays the lyrics to Strange Fruit, the song Billie Holiday made famous. Each lynching represents a tragic event or time of violence, murder and horrible atrocities in this country. The four little girls killed in the Birmingham, Ala. church bombing, the Mississippi, brutal killings of Emmett Til and James Chaney, the political assassinations of Martin Luther King, Medgar Evers; the mutilation of James Byrd; the disparity of justice of Trayvon Martin and Oscar Grant, the list goes on. The bodies burning and tied to the base of the trees represent the brutality of ignorance, and the social injustice, that NO people should have to endure.  Billie Holiday is also depicted with tears of grief. She states that singing this song made her fearful of retaliation, because its imagery reminded her of her father; she continued to sing the piece, making it a part of her live performances. In 1939, Strange Fruit sold a million copies, in time becoming Holiday’s biggest-selling record. Lawrence Jones – Artist (916) 484-5809 or www.history200.com.

Confirmed: Black Lives Matter, but not as much as White Lives!

Black Lives Matter, but not as much as White Lives! […]

On the heels of nearly six months of nationwide demonstrations that sparked an international movement against systemic racism and police violence, Black Lives Matter is expanding its influence into politics by forming a political action committee — a highly unusual move for a grassroots organizing group with no central leadership. […]

It’s been a different kind of social distancing as protesters across the globe have united separately to demand racial and social justice as Black people continue to be killed with apparent impunity. Protesters joined again on Saturday to chant and hold signs reminding the world that Black Lives Matter as demonstrations and rallies against racism dotted countries across the map following the police killing of George Floyd in Minneapolis on Memorial Day. […]