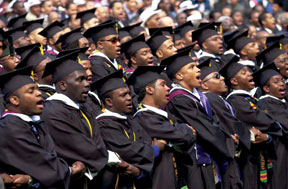 WASHINGTON (NNPA) –The number of Black males applying to medical school is lower than it was three decades ago, raising concerns about the United States’ future ability to have health care providers be as diverse as the patients they serve, according to a new report by the Association of American Medical Colleges (AAMC).

“No other minority group has experienced such declines,” wrote Marc Nivet, the chief diversity officer for AAMC, in a foreword for the report. “The inability to find, engage, and develop candidates for careers in medicine from all members of our society limits our ability to improve health care for all.”

The AAMC report titled, Altering the Course: Black Males in Medicine, paints a stark image of the current science, technology, engineering and math (STEM) pipeline and specifically how ineffective it has been with motivating young Black males to pursue medical careers.

“A similar trend is observed for first-time matriculants: in 1978, there were 542 Black male matriculants to MD-granting institutions, and in 2014, there were 515,” the report said. “In addition, of all racial and ethnic groups, the proportion of applicants to medical school who were male compared with female is lowest for African-Americans – despite an overall increase in the number of Black male college graduates.”

The push to get more young minorities to embrace STEM careers comes at time when researchers are predicting a short-age of 46,000 to 90,000 physicians by 2025 and studies have shown that increasing diversity in medical schools and in health care professions can boost civic engagement, expand exposure to different educational approaches and make it easier to recognize racism, the report said.

In a statement accompanying the report, Darrell G. Kirch, the president and CEO of AAMC, said that health care professionals have to work harder to get more young Black males into the talent pipeline to increase diversity in the physician workforce.

“The nagging challenge of health disparities requires all the best minds and perspectives,” said Kirch. “’Altering the Course’ is just the first step in identifying the problem. The AAMC looks forward to working with the [National Medical Association] to begin implementing solutions.”

A limited pool of scholarships and the staggering cost associated with earning a medical degree were identified as key challenges to getting more Black males into the medical school pipeline.

Entering the labor market with a heavy debt burden can often contribute to a sense of lasting economic strain for health professionals and can also act as another deterrent for Black male college students weighing the value of a medical degree.

“Talent is universal, but opportunity is not,” explained Ni-vet. “Not only are there several programs to address the issue, such as the White House initiative ‘My Brother’s Keeper,’ but academic medicine is working within the community and partnering with minority-serving institutions—the largest feeder schools to medical school—to help develop the next generation of physicians.”

SAAB, a mentoring and professional development organization that began in Ohio, was able to increase graduation rates for Black male undergraduates at the University of Louisville by almost 10 percent from 2005 to 2009.

According to the report, Morehouse College in Atlanta was the undergraduate institution that provided the most Black male applicants to medical schools with 148 between 2010 and 2014. The University of Florida in Gainesville (129), Howard University in Washington, D.C. (92), Xavier University in New Orleans, La., (90) and the University of Maryland in College Park rounded out the top five over the same time period. Four of the top 10 schools that provided Black male applicants to medical schools were HBCUs.

The report said that support networks, greater access to information for scholarships and grants, pre-medical education programs and updates to medical school admission policies and practices can help promote diversity in the student population at medical schools in the U.S.

The press release about the report explained that medical schools have updated their admission policies and practices in an effort to encourage diversity in their student body. These new policies look beyond a student’s performance in the classroom and exams to the student’s personal characteristics and attributes.

“It is true that more Black men are in college than ever before, but not enough of them are choosing the health professions as a career,” added Nivet. “We have to understand better why that is and lead the way in helping them see medicine as a rewarding and viable option.”

Removing flag may get done, but not now
[…]

Congress struggles to replace No Child Left Behind

As Congress works toward a comprehensive education policy that will replace the Bush Administration’s No Child Left Behind, two different bills from the House and Senate are up for consideration. […]

Earlier this month, leaders from six civil rights groups met with Attorney General Jeff Sessions at the Justice Department to discuss a range of issues that are critical to the Black community. […]