The members attended Dillard High School of the Performing Arts, where they met while playing in the orchestra band. The two received full scholarships and attended Florida International University (FIU). On their musical journey, their accomplishments included 2005 Apollo Theater Legend title and a $20,000 prize, playing alongside Grammy-winning artists such as John Legend, Alicia Keys, and even playing for past President Barack Obama at the 2013 Inaugural Ball.

Major influencers on the duo included Sylvester’s mother who introduced him to the violin as way to deter him from the street life, the janitor at Parkway Middle School who shared an inspiring story, and the sounds of jazz violinist, Stuff Smith whose album titled “Black Violin” inspired the group’s name. Their goals are to influence youth to break stereotypes and “do it like  no one has ever done it”, as mentioned at their nearly sold out shows on January 25, 2018 at the Broward Performing Arts Center.

The group was eager to return to their hometown to per-form for their community. On Thursday morning, more than 2500 students from Broward County Public Schools had the chance to see Black Violin perform in a one hour performance. That same night, over 2400 tickets sold to see the live performance. Even traffic congestion did not limit fans nor interested patrons from coming to see the duo. The group has performed at 180+ shows per year, internationally known and toured, playing in venues as far as Dubai and South Africa. The fans were able to enjoy their funky way mixing classical music with the sounds of Michael Jackson hits, hip hop icons such as Busta Rhymes, “Gimme Some Mo”, and DJ Kool crowd pleasing hype song, “Let Me Clear My Throat”. The band shared their solo performance with DJ SPS, and on drums, Nat Stokes. 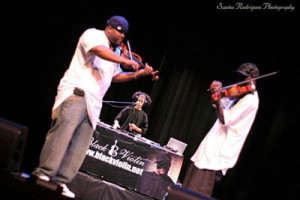 The purpose of the show and message that they want their younger audience to gain is, “try to be different and do something to make us come together as one”. And the audience reflected that statement: it was all ages, gender, cultural, and musical background interests. And all were clapping hands or on their feet enjoying the Classical Boom.

The conviction of Jason Van Dyke could prove historic, but much more needs to be done to stem the tide of police shootings involving African Americans […]

Black History Month: Soccer is a religion, and America has a Pope

Soccer is the world’s game, the beautiful game. For many, it’s even more than a game…it’s a religion. Every weekend, we put on the uniform of team and celebrate them at stadiums we call cathedrals. It consumes our daily lives, and we thank whoever we believe is in that upper room for players like Messi, Ronaldo, or Pele.