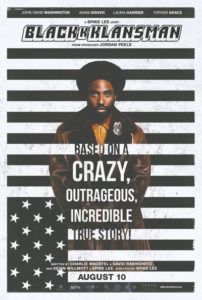 This exemplary production by Spike Lee is a must see movie.  This movie received rave reviews at the annual Cannes Movie Conference.  It is set in the early nineteen-seventies and based on a true story, in which two officers in Colorado Springs infiltrate the Klu Klux Klan that is planning criminal acts of violence.

The lead character, Ron (David Washington), is the first Black officer hired by the Colorado Springs Police Department. He gets involved in this that case due to his dislike of being the “Token Black” hiding behind a desk at the station house.

This happens from an ironic set of events. His boss is paranoid about a “Black Panther” a speech at a local college.

Ron does surveillance of a speech by Kwame Ture, born Stokely Carmichael, a longtime activist and former Black Panther leader.

He becomes infatuated with one of the students.  This movie has a romantic side to go with the social commentary. Plus, in classic Spike Lee, adds some comedic “Sugar” to go with the “Vinegar” on what the Klan’s legacy has become.

After watching the movie, you will definitely recommend it to friends and family.  This movie is so powerful, “Academy Nominations” are being predicted. Enjoy!