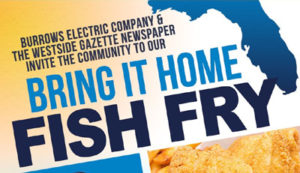 As people around the state gather to create and keep the momentum going to elect Florida gubernatorial candidate Andrew Gillum, members of the historic Sistrunk Community and the surrounding area communities joined for an old-fashioned fish fry to help the Gillum campaign “Bring it Home”!!!  The fish fry was hosted by Burrows Electric Company and The Westside Gazette Newspaper. We were honored to have both founders of each business, Mr. George Burrows and Mr. Levi Henry, Jr., respectively there to celebrate two of the oldest Black owned businesses in the area with deep roots in the community.  Both businesses have been in the community for decades and both have an abiding love for the people of the community who might not always get invited to the “table of opportunity”.  Although the main goal of the fish fry was to raise money for the Gillum campaign (over $2,200), it was not the only goal.  The hosts wanted to bring the local community together in fellowship to better engage and inform them in the election process.   All were invited, and no donation was too small… all were welcomed to partake in the hot fish and fellowship.   As RCMEDIA DJ played all the familiar favorite tunes election information was shared, amendment discussions were held in small group conversations, volunteers were signed up, and donations were made.  A great time was had by all and much excitement was generated for this very important and historic election.

Let’s keep the momentum going all the way to November 6th and BRING IT HOME TOGETHER with ANDREW GILLUM we got to “WALK IT LIKE WE TALK IT”!!!!!

Serena Williams, a champion on and off court

Serena Williams, a champion on and off court
[…]

Black Panther Party for Self-Defense is making waves in the film community. It’s been a breakout entry at the Sundance Film Festival, and has already won an award at the Pan African Film & Arts Festival in Los Angeles. […]

Another case of Alzheimer’s

The implications of the increase in Alzheimer’s patients goes far beyond the personal loss and sadness experienced by families. We are talking about immense healthcare costs. As I have witnessed in my extended family, an individual who is otherwise healthy can suffer a long and slow decline that can be not only emotionally intolerable for all involved but immensely expensive, sometimes to the point of personal bankruptcy. […]