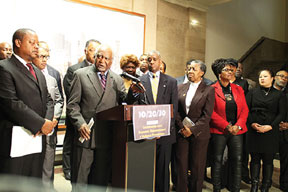 Rep. Danny Davis speaks at a press conference to address violence and needed community programs. Davis and representatives in attendance from all levels of government support the 10-20-30 plan, one that will allocate 10 percent of federal funds to communities where 20 percent of the population has lived below the poverty line for the last 30 years.

After burying his 15-year-old grandson, a victim of gun violence at the hands of two teenage associates, Representative Danny K. Davis (D-7th) called for the implementation of the 10-20-30 plan he says will help eliminate poverty and the flow of illegal guns into the Black community.

Davis’ grandson, Jovan Wilson, was killed last month. He was the 701st victim of gun violence in Chicago since the beginning of this year. It is alleged that a 17- year-old girl and a 15-year-old boy, both known to Wilson, forced their way into Wilson’s home demanding the return of gym shoes that had been swapped for a pair of trousers. An argument ensued and Wilson was shot. Both teens have been charged with murder.

“The more I study the issue of gun violence, I am becoming more and more convinced that there is no panacea, no silver bullet, no single answer to the cause and no one solution,” said Davis at a City Hall press conference.

He blames the violence on poverty and believes the 10-20-30 plan introduced by Rep. Jim Clyburn (D-SC) could help reduce the violence. Explaining the plan, Davis said 10 percent of the federal funding would go where 20 percent or more of the population had lived below the poverty line for the last 30 years.

“Every unit of government from federal to local could determine to target 10 percent of its annual appropriations to areas where 20 percent of its population have lived at or below the defined poverty levels for 30 years or more,” Davis said.

As evidence, Davis cited the U.S. Census poverty rate for Blacks in Illinois as being 31.6 percent and for all children it is 20.7 percent. “This plan is cost effective,” said Davis. “It will not raise taxes but will raise eyebrows. It will raise hope. It will raise opportunity, and it will raise possibility.”

Davis said the cost of the 10-20-30 federal plan would be a shared one among state, county and city levels of government. He said several federal agencies have applied this funding including the Department of Agriculture, Department of Commerce and the Department of Justice.

“We are a unified body of every level of government…” including activists. “There are solutions to gun violence” Davis said.

Painting a dim picture, Reverend Jesse Jackson talked about the closing of 50 Chicago schools, banks closing, racial disparity…a formula for “access to guns…drugs in, jobs out.”

Former Illinois governor Quinn said when he was governor he and Davis unveiled a program called ‘Put Illinois to Work’. “We need a decent bud-get in our state to make sure that people have jobs. The best way to keep families together is called a job,” and one that pays a decent wage.

Rep. La Shawn Ford (D-8th), referring to the number of federal, state, and local representatives present said, “the Black community should be proud today because we are saying enough is enough.” Ford said abandoned properties on the south and west sides of Chicago “continue to contribute to the violence and the dangers of our communities.”

Cook County Commissioner Richard Boykin, who recently led nine tours in endangered Chicago communities “where there are the highest levels of

unemployment… hopelessness   and violence….” said the per capital income in Englewood was less than $15,000 a year. “We must do everything we can to invest in these communities,” said Boykin. “

Boykin said more than 4000 people have been shot and over 700 killed so far this year. “It is a state of emergency, and it’s time for us to act. We’ve waited late. Every day more people are being killed….”

Agreeing with his colleagues, Senator Kwame Raoul said, “There is an undeniable link between poverty and violence. Those who have resided in communities with high concentrations of poverty have also suffered from the trauma caused by the gun violence that surrounds them. We must intentionally direct resources to such communities in a trauma in-formed manner.”

Rep. Davis noted, “that’s why this level of unity we’re seeing right here…I guarantee we will produce some results we have not seen.”