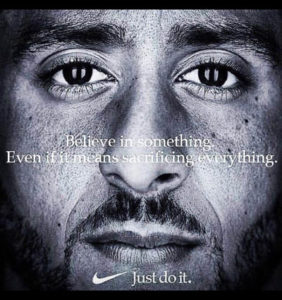 Nike selected former San Francisco 49ers quarterback Colin Kaepernickas the face of its “Just Do It” campaign, which is celebrating its 30th anniversary.

Darren Rovell of ESPN reported the choice of Kaepernick, who started the movement to kneel during the United States national anthem to protest racial injustice in August 2016.

Charles Robinson of Yahoo Sports later reported that Kaepernick and Nike agreed to a new contract despite the fact Kaepernick has been with the company since 2011. Robinson added that “interest from other shoe companies” played a part in the new agreement.

Per Robinson, the contract is a “wide endorsement” where Kaepernick will have his own branded line including shoes, shirts, jerseys and more. According to Robinson, Kaepernick signed a “star” contract that puts him level with a “top-end NFL player” worth millions per year plus royalties.

“I am not going to stand up to show pride in a flag for a country that oppresses black people and people of color,” he told Steve Wyche of NFL Media about the decision two years ago. “To me, this is bigger than football and it would be selfish on my part to look the other way. There are bodies in the street and people getting paid leave and getting away with murder.”

Kaepernick opted out of his contract with the Niners in March 2017 and hasn’t been able to find a new team since. An April visit with the Seattle Seahawks was postponed after he did not assure the franchise he’d stand for the anthem if signed, per ESPN’s Adam Schefter.

The 30-year-old quarterback filed a collusion grievance against the league, which claimed he was being kept out of the league because of the protests he started. His argument received a boost last week when arbitrator Stephen B. Burbank ruled there was enough evidence to require a full hearing.

Although Kaepernick has received numerous honors for his efforts, including being named GQ magazine’s Citizen of the Year for 2017, the movement he started remains polarizing.

A poll from NBC News and the Wall Street Journal released last week showed 54 percent of respondents deemed kneeling during the anthem “inappropriate,” while 43 percent called it “appropriate.”

Meanwhile, NFL owners approved anthem rules in May that would force players to stand on the sideline or remain in the locker room during the anthem. Teams with players who did not comply with the new policy would be subject to league fines, while teams could hand out individual punishment.

Those guidelines are on hold, however, as discussions between the NFL and the NFL Players Association continue with the 2018 season set to start Thursday night. (Photo courtesy of Colin Kaepernick, via Twitter)

The Miami Dolphins Create the RISE Tailgate to Inspire Change

Miami Dolphins owner Stephen Ross created the RISE tailgate in order to help drive social progress and advance in race relations.  These days, it’s a scary environment for people to live in, especially if you’re […]