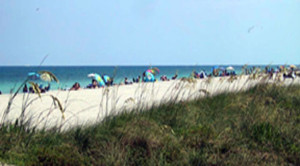 In an eerie example of events building to some kind of crescendo, the historic “colored beach” in Fort Lauderdale and in Miami are simultaneously back in the news. Both are on barrier islands which must have been considered noxious throw-aways in the Jim Crow era, worthy of being given for the Negroes’ use. Ironically we now know that barrier islands are of vital importance to protect coastlines from the effects of storm surge.

Under a bill proposed by State Senator Chris Smith and State Rep Evan Jenne, the “Colored Beach” at John U. Lloyd  State Park will be renamed for the Black pioneers who integrated the beaches at the risk of life and limb. Gov. Scott signed the bill renaming the Von D. Mizell-Eula Johnson State Park that takes effect July 1.

But  I felt as if I’d fallen into the abyss when I read last week that Miami Dade County is drilling a 10,000-foot deep well on Virginia Key to pump sewage underground for storage. TO SAVE MONEY!! It doesn’t take more than average intelligence to sense that this is a dangerous gamble that will exacerbate our dangerous water situation.

To be clear, Gov. Scott recently signed a bill relaxing permitting laws and allowing polluters to determine the level of pesticides they can use on their land, putting them on the “honor system.” Immediately after that the skies opened up as if weeping at our folly. Three times the usual amount of rain we’d get in the season descended on South Florida. To control the resultant flooding, the South Florida Water Management District pumped water off the agricultural lands into Lake Okeechobee, and out to the St. Lucie and Calahoosahatchee Estuaries.

Fouled water, massive fish kills, and a hugely negative impact on the tourism industry spurred an immediate backlash from businesses and citizens. Suddenly Governor Scott began touting new support for restoring the Everglades, a sure fire way to gain brownie points from City Hall to Congress.

Simultaneously, we learned that the Turkey Point Nuclear Plant in Biscayne Bay is leaking dangerously polluted water into the Bay, with impacts still unknown. When radioactive material 200 times the accept-able level is found in our water, it’s time for us to find out more.

According to Climate Central, by 2030 we will begin experiencing serious sea level/storm surge effects that will affect millions of people living on the coasts and swamp billions of dollars in infrastructure. If Everglades restoration, involving a partnership between the federal and state governments has been on the drawing board for almost 30 years and we couldn’t accommodate a few inches of unexpected rainfall, how many years will it take us to come to agreement about what needs to be done STATEWIDE to prepare for sea level rise, and then to get it done?

If an increase in the average rainfall can lead to such dire consequences including dead fish on the beaches; back pumping from the cane fields into Lake Okeechobee; endangered animals drowning in the Everglades; and an unaccustomed torrent of emails from the South Florida Management District telling the public all the things they’re doing right, what is going to happen when we have a hurricane, a weather event to which South Florida is prone? What will we do when the winds off the Atlantic or the Gulf whip the waters onto the land’s end occupied by so many people? What will we do when that water is increasingly toxic? What do we imagine will happen to the sewage pumped beneath our aquifers on a barrier island?

I can only say that if we the people fail to exercise our citizenship rights to be involved in our government and big decisions such as these, then maybe we deserve what we get. It has long been said that in a democracy, we get the kind of government we deserve, as we vote on it. Failing to be involved in every aspect of the process, from making sure we are living up to one woman, one vote, to keeping our elected officials on track, means we are part of the problem.

It’s time to do your research as a conscious citizen and get involved.