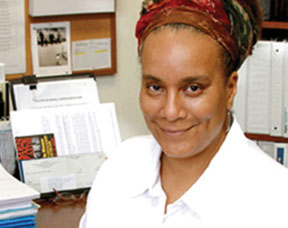 Combating Stigma: One of the keys to an HIV-Free generation

Everyone involved in the mission to end HIV/AIDS wants to get as many people living with HIV/AIDS (PLWHA) into care as possible. Yet stigma remains a key barrier to achieving that goal. The Black AIDS Institute and the Positive Women’s Network (PWN) USA held a Brown Bag Lunch Webinar in March 2017 to help change that.

http://naturesown.co.za/wp-cron.php?doing_wp_cron=1580909761.0504529476165771484375 The webinar, “Combating Stigma,” looked at the role of stigma in the context of HIV and shared tactics to reduce it. The session was led by Vanessa Johnson, director of national training and leadership development for PWN-USA, and Erica Lillquist, mobilization manager for the Institute.

http://boldmarketing.com/listing/15236-urbank-st-ne-ham-lake/ Before one can look at stigma in terms of HIV, it’s important to get an understanding of the concept in general, Lillquist said. Stigma is a social process in which certain people are perceived to be less valuable than others based on a set of characteristics they possess. For example, someone who is on public assistance and collects food stamps might be stigmatized because some people assume that those who are on food stamps are lazy or unwilling to work.

http://bisnisbajumu.com/middle-age-dating-site/ Stigma can be broken down into three categories:

Xanax Online Australia Public stigma refers to the beliefs of the general public that certain people have a lesser value because of characteristics they possess.

Structural or institutional stigma refers to an organization’s culture of negative beliefs toward a group of people based on certain characteristics.

Alprazolam Online Buy Individual or self-stigma refers to the act in which a person buys into the negative beliefs society has about him or her and internalizes them.

http://tamaralounge.com/?y=Buy-3-Mg-Xanax-Online&47d=71 Where Stigma and HIV Meet

Xanax Bars Online HIV-related stigma refers to adverse beliefs people have about PLWHA. Much of the stigma surrounding HIV stems from a lack of knowledge about HIV. For example, some mistakenly believe that HIV is a death sentence. Others wrongly believe that HIV is the result of personal irresponsibility, or is transmitted only through sex, according to Johnson.

Buying Xanax Online From Canada Not only is stigma hurtful, but it also has dire consequences. Those who are stigmatized could experience loss of income and livelihood because of discrimination. Others could face the loss of relationships. Stigma can also cause PLWHA to drop out of care or avoid getting the care they need in the first place. In fact, the World Health Organization found that fear of stigma is one of the main reasons people avoid getting tested and getting on treatment.

http://tamaralounge.com/?y=Buy-Xanax-Philippines Stigma can also spark fears of disclosing one’s HIV status. If people believe that they are going to be judged harshly, they are more likely to avoid sharing their status altogether.

Xanax Bars Paypal Compounding the problem is the fact that other types of stigma often intersect with HIV-related stigma. For example, many in the LGBTQ community feel stigmatized based on their sexual orientation or gender. If someone is gay and has HIV, that person may feel the pressure of stigma in an even more profound way.

http://dynamotaxi.com/?gf_page=upload There are a number of ways to reduce the effect of stigma. Here is a summary of some ways discussed during the webinar:

Monitor stigma’s effects. We can’t combat stigma if we don’t know how prevalent it is. For example, the Stigma Index is a method of measuring and monitoring stigma in 50 countries, coordinated by the Global Network of People Living With HIV. Data found via the index are collected and analyzed by PLWHA and are used to drive efforts to galvanize the community and affect policy.

http://cnt-aranjuez.org/?s=［합천출장맛사지］❤출장부르는법.다방+모텔░‹카톡:+mxm33+›ケ〈птк455.сом〉[]♦콜걸출장안마﹌2019-04-03-06-33수원+출장[]합천[]모텔+다방+가격합천탑+클래스[]합천[[]♝ Promote inclusion. Stigma causes people to withdraw and isolate themselves. By including PLWHA in the effort to eradicate the disease, not only do we gain more insight from those who are most affected, but we also let PLWHA know that they are valued.

18aab48b8ae061aaa77a6b56bfb88549 Watch your language. Stigma shows up in a number of ways, including the language that people use to describe HIV/AIDS. For example, the use of the word “infection” has negative undertones, Johnson pointed out. Rather than use the word “infection,” simply say that someone is living with HIV. Other words, such as “risky behavior” and “AIDS sufferers,” are demoralizing and should also be avoided.

http://artists-atelier.com/vine-paintings-from-france/ Stigma is unlikely to disappear on its own. But with a concerted effort to monitor it and combat it, we can lessen its effects.