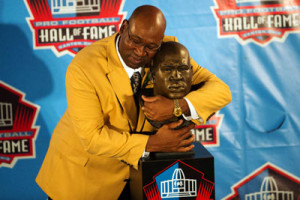 Cortez Kennedy, a 300-pound but nimble defensive tackle for the Seattle Seahawks in the 1990s who was inducted into the Pro Football Hall of Fame in 2012, was found dead on Tuesday at his home in Orlando, Fla. He was 48.

A spokeswoman for the Orlando Police Department said that there was nothing suspicious about Kennedy’s death but that it was being investigated. He had been experiencing headaches over the past week, his stepfather, Joe Harris, said in a telephone interview.

Kennedy was unexpectedly quick for his size, which enabled him to explode off the line of scrimmage when the ball was snapped. He became the prototype for the strong, 300-pound-plus defensive linemen of the 1990s in the N.F.L.

“I like being big because it gives me confidence,” he told Sports Illustrated in 1992, the year he had a career-record 14 sacks. “Nobody wants to mess with me, and it helps me play my position.”

chosen in the 1990 N.F.L. draft out of the University of Miami, played his entire 11-year career with the Seahawks. He was named by The Associated Press as the league’s defensive player of the year for the 1992 season, despite Seattle’s 2-14 record that year. Kennedy also played in eight Pro Bowls.

In an interview with The New York Times in 2015, he said that when he became a multimillionaire with his first contract, Mr. Harris told him to buy what he liked in his roo-kie season, but save money afterward. So he bought six cars — one for his mother, one for his girlfriend and four for himself — but he sold two of his when he saw the bill for the auto insurance. He adhered to a rigorous budget for the rest of his career.

Kennedy had 58 sacks and three interceptions in his career. He also returned one fumble 39 yards for a touchdown.

While he was attending Rivercrest High School, his mother, Ruby Harris, made him quit the football team because of poor grades. When the team went to the state championship, she sent him a postcard that read, “Wish you were here.”

When he told that story at his Hall of Fame induction, he called his mother’s disciplinary action “the turning point of my life.” He went on to graduate from Rivercrest.

After attending Northwest Mississippi Community College, he received a scholarship to the University of Miami, where he played in 1988 and 1989. (He later returned to the school to graduate.) Jimmy Johnson, who coached him in 1988, wrote on Twitter that Kennedy was among “the most talented players I ever recruited or coached.”

Kennedy played on mostly losing teams in Seattle and in only one playoff game, a loss to the Miami Dolphins in 2000.

In addition to his mother and stepfather, he is survived by his daughter, Courtney. Further information about survivors was not available. His marriage to Nicole Sanders ended in divorce.

During his induction speech, Cortez told his daughter how much he loved her and added: “But like I’ve been saying — 250 more days, you got to get out of the house and go to college. You know you can always come home to me, daddy’s little girl.”

In recent years, Kennedy was an ambassador for the Seahawks and an adviser to the New Orleans Saints, whose general manager, Mickey Loomis, worked for the Seahawks when Kennedy played there.

In 2015, Mr. Loomis described Kennedy to The Times “as a guy who had a lot of success, was able to protect what he earned, lived a good lifestyle and has done well 15 years after his career ended.”

On a cold, wintry Sunday afternoon in Green Bay, the Dolphins could not escape with a victory. At no point in the game could the Dolphins grab a lead nor score a touchdown. The final score was 31 to 12. […]

The Miami Dolphins announced their Day 3 picks during Rounds 5 and 6 of the NFL Draft from the Baptist Health Training Facility at Nova Southeastern University. The team’s Day 3 selections – which began on Saturday, April 29 at 12 p.m. ET – celebrated youth football in South Florida with several special guests on hand. […]