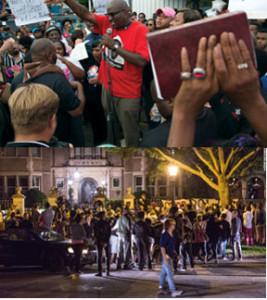 Deconstructing Reconstruction in the Aftermath of Baton Rouge, Falcon Heights and Dallas

After Baton Rouge, Louisiana and Falcon Heights, Minnesota there was Dallas, Texas. After rogue cops unceremoniously killed two Black men, a deranged shooter killed five police officers. The shooter, identified as Micah Johnson, reportedly said that he wanted to kill White police officers. Too many commentators referred to his middle initial “X.’ in an effort to be more racially provocative. Too many, like the unrepentant racist and former New York Mayor Rudy Giuliani, used the shooter’s actions to excoriate the Black Lives Matter Movement.

The phrase “Black Lives Matter” is not racist, because it simply reflects our nation’s history. From our founding until today, there have been too many opportunities to legalize the misguided notion that Black lives do not matter. The fact that our Constitution reduces enslaved African Americans into a fraction of a person suggests that Black lives did not matter, at our nation’s founding, as much as White lives did. The differences in the terms and conditions of indentured servitude for Whites and enslavement for Afrodescendents further cemented the notion that Black lives did not matter as much as white lives did. The persistence of enslavement, and the contradictions that came from the practice of “breeding” (i.e., treating Black people as animals to increase “stock”) heightened contradictions, because the slave owners were selling their children and siblings. What did they think of themselves, if they felt they had to couple with people they found “subhuman?”

Has former New York Mayor Rudy Giuliani ever read a history book? Does he understand that if revenge were ever a motive in Black/White interactions it would have been all over but the shouting between 1865 and 1876? Formerly enslaved people were hopeful about emancipation, but caught between hope and despair when Black Codes were imposed, when people were lynched for simply asserting the right to walk on the sidewalk, when soldiers were lynched, in uniform, because they did not defer to fellow citizens. Even though Constitutional amendments were passed to abolish enslavement, rigid Southern attitudes imposed a quasienslavement that persisted until the civil rights movement, and White supremacist attitudes that that persist until today.

When our Constitution was written, John Adams lamented that the issue of enslavement was a conundrum that his gene-ration was imposing on subsequent generations. When the 13th Amendment was passed, there was no playbook to detail how our nation would transcend enslavement. We have never taken the time or energy to condemn racist attitudes, assuming they would simply go away. They have not. And millions of African Americans have righteous resentment about the many micro-aggressions (not to mention murders) that our community experiences. The micro-aggressions of White skin privilege are minor compared to the macro aggressions of a rogue police officer.

Have any of these people ever read a history book? Do they even understand that if revenge were a motive, it might have been extracted in 1866, not today?

The process for ending enslavement was imperfect. Too many Southerners cleaved to the notion that people of African descent were inferior, and then they passed laws to enforce unequal status. Jim Crow laws and Black Codes, prohibitions against property ownership and voting, unequal access to education, not to mention the constant night-riders, the granddaddies of contemporary rogue police forces, all existed to enforce subjugation and fear.

Following a 10-month investigation into the extrajudicial killing of Alton Sterling, Louisiana’s Attorney General Jeff Landry announced that his office would not pursue criminal charges against the officers involved. […]

Souls to the Polls punctuated Election 2014
[…]