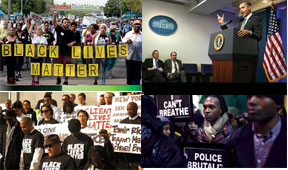 After days of violence and heightened racial tensions in the U.S., the White House responded this week to an online petition asking the federal government to formally label the Black Lives Matter Movement as a “terror group.”

“Terrorism is defined as ‘the use of violence and intimidation in pursuit of political aims,’” read the “We The People” petition, created July 6 on the White House website. “This definition is the same definition used to declare ISIS and other groups, as terrorist organizations.”

Black Lives Matter, the petition said, “earned this title due to its actions in Ferguson, Baltimore, and even at a Bernie Sanders rally, as well as all over the United States and Canada.” It asked the Pentagon to recognize the group as such “on the grounds of principle, integrity, morality, and safety.”

Because the online document received at least 100,000 signatures — at the time of this reporting, it had garnered over 141,000 names — the White House was automatically prompted to respond.

“[T]herefore,” the response read, “we are not able to address the formal request of your petition.”

The White House then went further: Acknowledging that it was a “difficult time” for the country — and that the debate remains a “charged” one — the statement additionally prompted petition signers to consider President Obama’s words calling for compassion towards the movement.

“I think it’s important for us to also understand that the phrase ‘Black Lives Matter’ simply refers to the notion that there’s a specific vulnerability for African Americans that needs to be addressed,” the president said last week, talking to a Washington, D.C. gathering of enforcement officials, civil rights leaders, elected officials and other activists on the issue of racial disparities in the criminal justice system. “We shouldn’t get too caught up in this notion that somehow people who are asking for fair treatment are somehow, automatically, anti-police, are trying to only look out for Black lives as opposed to others. I think we have to be careful about playing that game.”

The petition came on the heels of deadly officer-involved shootings in Baton Rouge, Louisiana and Falcon Heights, Minn., and after days of Black Lives Matter protests for more police accountability.

Black Lives Matter protesters condemned the massacre in Dallas, and prominent members did the same after Sunday’s Baton Rouge shooting of police officers.

One public voice of the movement, DeRay McKesson, urged peace after news of the Louisiana deaths broke.

“I’m waiting for more information like everybody else,” McKesson told the New York Times. “I have more questions than answers.”

“The movement began as a call to end violence,” he said. “That call remains.”

Errol Barnett contributed to this report.

The audacity of Trump calling Hillary a bigot and a racist

The audacity of Trump calling Hillary a bigot and a racist