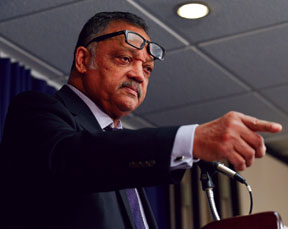 Rev. Jesse Jackson says that the poor are left to fend for themselves, rising to attention only when violence breaks out, when innocents are shot, when tragedies like Flint become public. Photo taken during a panel discussion on the Voting Rights Act of 1965 at the National Press Club in Washington, D.C. on February 18, 2015    (Freddie Allen/NNPA News Wire)

Flint, Mich. is impoverished. The auto plants have closed. Forty percent of the city’s 100,000 residents live below the poverty level. It is majority minority. It’s been in fiscal crisis since 2011, with the state taking over budgetary control and a state-appointed “emergency manager” driving policy focused on cutting spending.

Flint residents are Americans, but like many impoverished Americans they are forgotten. And state officials led by Gov. Rick Snyder have shown that they consider the residents disposable.

In Flint, the water supply has been poisoned by lead. Police are now delivering bottled water from door to door. But it may be too late for hundreds of kids who are already suffering from elevated levels of lead in their blood. The damage done is irreversible with lifelong consequences, including lowered intelligence and long-term mental and emotional damage.

How did this happen? The emergency manager — accountable only to the governor and state officials — decided to save money by switching Flint’s water supply from Lake Huron to a cheaper source, the Flint River. Only the river had been poisoned by waste from nearby factories for generations. The toxic wastes not only turned the water brown, it corroded the aged pipes of Flint’s water system, unleashing lead into the water. Federal law required that the water be treated, but that would have cost $100 a day, so it was not done.

Parents began to complain of rashes and hair loss. The state’s environmental quality agency denied there was a problem. High-level state officials knew that the water supply was lead poisoned for six months before declaring an emergency. Finally, a Flint pediatrician tested the blood of children and discovered lead levels double and even triple the prior amounts. State officials denounced her work before realizing the truth could no longer be hidden.

Finally, Gov. Snyder ended the denial. He declared an official emergency, and four days later called for delivering bottled water. The head of his environmental agency resigned. Snyder apologized for the catastrophe, but calls for him to resign continue to build.

Flint is not alone. Across America, in ghettos and barrios, reservations and rural valleys, the poor are isolated and too often forgotten. Systems basic to civilization — plumbing, water systems, school houses, garbage collection and treatment, roads and public transport — are in squalor, lacking even the investment to keep them up to minimum standards. Impoverished neighborhoods often lack hospitals, grocery stores, and decent public spaces. The poor are left to fend for themselves, rising to attention only when violence breaks out, when innocents are shot, when tragedies like Flint become public.

The cost of this callousness — in lives lost, disease, mental damage, crime, drugs, hopelessness — are immense. This isn’t about money. We pay more on the back end — in prisons and emergency rooms, cops and guards, prisons and addiction centers — than we would have to spend on the front-end investments that would give every child a chance.

Conservatives continue to call for dismantling environmental regulations. They slash budgets for policing violations by corporations or cities. They want to slash support for poverty programs and block-grant them to the states and localities. The next time you hear that rap, think of Flint, its poorest children betrayed by state officials. Think of Flint, deprived even of safe water in order to save a few bucks. Think of Flint and investigate your own community — the horrors of Flint are not exclusive to that city.

We need a President of Black America

We need a President of Black America
[…]