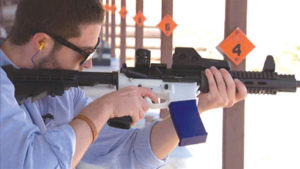 WASHINGTON — Democrats in Congress called on President Trump Tuesday to stop the public release this week of a blueprint that contains instructions on how to build plastic guns with a 3D printer.

“Forget about the TSA guarding the plane you board,” Sen. Richard Blumenthal, D-Conn., said of the guns at a Capitol Hill press conference with other Senate Democrats. “The failure to ban them will mean blood on the hands of officials who have that responsibility.”

The Trump administration had decided in June that the public release of instructions to build the guns, which are compiled by Austin, Texas resident Cody Wilson, would not violate a federal law; on Friday, the government said that Wilson wouldn’t break the law if he posted the instructions online. Wilson’s website had said that the downloads of the blueprint would be released Wednesday, though he actually began making them available last weekend. 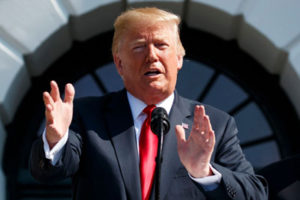 Trump on Tuesday morning seemed to indicate he was re-examining the move. “I am looking into 3D Plastic Guns being sold to the public,” he tweeted. “Already spoke to the NRA, doesn’t seem to make much sense!”

“Where the heck has he been?” he asked.

Under the Obama administration, the State Department had sued Wilson and blocked him from posting his instructions online, but the department under Trump dropped the lawsuit.

Though the department had initially said his blueprint would violate the arms export law, it reversed course in June. As the federal government considers whether to change the rules around the law, they made an exception to the rule last week, allowing Wilson to begin posting his material online.

Secretary of State Mike Pompeo, questioned by Democrats about the situation last week during testimony before the Senate Foreign Relations Committee, said that he would look into the matter, but lawmakers said Tuesday they had not yet received a response from him.

Sen. Bill Nelson, D-Fla., whose state has been affected by gun violence in recent years with the Pulse nightclub shooting and the Parkland school shooting in February, is filing legislation Tuesday to block the release of Wilson’s plans. He noted at the press conference that a number of lawmakers had already filed legislation that would require any guns that are made to contain a metal part for detection purposes, and to carry a serial number.

In the House, which is on recess until September, Rep. Seth Moulton, D-Mass., tweeted Tuesday that he’s introducing a measure to ban 3D printed guns.

More than 1,000 people have already downloaded the 3D plans for AR-15 semi-automatic assault rifles, according to Pennsylvania Attorney General Josh Shapiro. A number of states, including Pennsylvania, have joined in preparing a lawsuit to file in federal court to block Wilson’s website from making the instructions available online and attorneys general from 20 states wrote to Pompeo and Attorney General Jeff Sessions Monday urging them to revoke permission for the downloads.

Republicans largely remained silent about the 3D gun instructions Tuesday following the president’s tweet, though Rep. Thomas Massie, R-Ky., said there was little that Trump — or anyone else — could legally do to stop the release. “Even Congress can’t ban 3D printers, the internet, or the 1st Amendment. The President certainly can’t. And besides, there’s already a law against undetectable guns. … With whom is he speaking at the NRA?”

NNPA continues its series on missing Black women and girls

As Trump cries that a border wall is needed to eliminate an imaginary crisis, organizations like the Black and Missing But Not Forgotten, the Black and Missing Foundation (BAM) in Landover Hills, Maryland, and the National Center for Missing and Exploited Children (NCMEC) in Alexandria, Va., struggle to shed light on the real emergency that is of the nation’s missing. […]

Children in cages create glimmers of the moral reserve

Children in cages create glimmers of the moral reserve […]