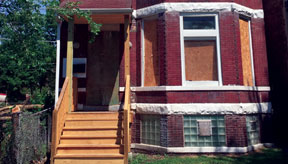 It looks like an ordinary building on the South Side, but its occupants were not. For 121 years, the two-story structure has stood in Chicago’s predominately Black Woodlawn neighborhood. An unassuming edifice built with Chicago’s muscular red brick, it’s a piece of Black history that was recently sold before the owner found out that Mamie Till-Mobley and her son, Emmet Till, once lived there.

Emmett was a 14-year-old boy whose brutal murder drew global attention and helped spark the Civil Rights Movement. The building was the last Chicago home that Emmett lived in before his life came to a tragic end on Aug. 28, 1955—a time when racial tensions began to boil in the South.

His mother lived in a building that’s located just four blocks east of the Chicago Crusader office. It’s one of many structures in Woodlawn that have been purchased and rehabbed by Elite Invest, LLC—a development and property management firm in South Shore that’s in the midst of an ambitious plan to restore residential and office buildings that have been long neglected on the South Side. Some of these structures were occupied by prominent Black Chicagoans in sports and politics.

This year, the firm has been busy seeking buyers for properties that have some curb appeal in neighborhoods that were once shunned by investors.

One of them is the building that Emmett and his mother once called home. Based on public records, since 2001, the building at 6427 St. Lawrence Avenue has been sold five times. Decaying from time and neglect, the building was once worth just $23,500; that’s when Elite Invest purchased it from a bank in 2015.

Last spring, without knowing the famous occupants, Alex Al-Sabah, principal of Elite Invest, completed an extensive renovation, which included installing a new set of wooden steps for the porch. After the makeover, the building’s value more than tripled to $185,000.

“There were squatters there and a big drug raid, so I think they were running drugs,” Al-Sabah said in an email to the Crusader.

Weeks after closing a deal with a property owner, Al-Sabah learned that he sold the building where Emmett and his mother lived.

“We found out about it later; pretty cool,” Al-Sabah said in an email. “If I would have known sooner, I wouldn’t have sold it.”

The new owner of the building has not been disclosed. The building was still boarded up during a visit by a Crusader reporter on July 5. Properties such as this can be a prime target for “flipping” — a practice where owners purchase properties then resell or rent them out.

Buyers interested in purchasing or renting properties that are rehabbed and sold by Elite Invest can go on the firm’s website, EliteInvest.com.

According to the website, four out of nine executives with Elite Invest are Black.

Property records show the 2,308 sq. ft. building where Emmett Till called home has two bathrooms, one on each floor. Here, Mobley gave several interviews after the death of her son.

Two of Till-Mobley’s surviving extended relatives: cousins, Ollie B. Gordon, 68, and her daughter, Airickca Gordon-Taylor, 48, spoke to the Crusader about the living arrangements at the house.

“We were living in the house when Emmett was killed in 1955,” said Gordon. “I was around seven years old at the time. Mamie and Emmett lived on the second floor, and Mamie’s uncle, Mack Carthan, lived on the first floor.”

Gordon said Till-Mobley owned the house and moved into the building in the early ‘50s after moving from her native city, Webb, Miss. At the time, Gordon said Emmett’s grandmother, Alma Spearman, lived on the West Side and helped other relatives move from Mississippi to Chicago during the second half of the Great Migration.

Gordon-Taylor said she and her mother revisited Emmett’s house in 2011. At that time, Gordon-Taylor said a Black woman who was blind stayed on the first floor while the second level was being renovated. After the two told the woman who they were, she let them inside to see the house.

The cousins said Till-Mobley owned the house for years. Since many relatives who lived in the building have died, they had no information on the exact dates Till-Mobley or her extended relatives lived in the house. Gordon said at one point, she wanted to turn the Emmett’s childhood home into a museum.

In a 2003 PBS documentary, The Murder of Emmett Till, Mobley is captured in a photo in front of the house. A wooden building that stood to the left of her home is no longer there. Today, an empty lot is all that remains next to the famous building. To the right, a two-story greystone still remains.

In the documentary, Mobley learned about her son’s brutal death at the house, which is shown in black and white several times as Mobley speaks.

“The words were like arrows sticking over my body,” Mobley said in the documentary. “My eyes were so full of tears until I couldn’t see. And when I began to make the announcement that Emmett was found and how he was found, the whole house began to scream and cry. And that’s when I realized that this was a load that I had to carry.”

Gordon and Gordon-Taylor are part of the Mamie Till-Mobley Memorial Foundation, which marked the 60th anniversary of Emmett’s death last year with a weekend-long memorial in Chicago.

Since his death, 71st Street has been named after Emmett. Less than a mile from his Chicago home is the Emmett Louis Till Math and Science Academy. Gordon-Taylor attended that school when it was James McCosh Elementary School before it was renamed after Emmett in 2005. Mamie Till-Mobley Park is also located in the neighborhood at 6404 S. Ellis Ave.

Mobley died in Chicago on Jan. 6, 2003. Her three-hour funeral at the Apostolic Church of God in Woodlawn drew thousands of mourners, including Reverend Jesse L. Jackson Sr. and the nation’s first Black female senator, Carol Mosley-Braun.

At the time of her death, Mobley was writing a book, Death of Innocence: The Story of the Hate Crime that Changed America. It was published in 2004.

The Chicago Crusader is a member publication of the National Newspaper Publishers Association (NNPA). Learn more about becoming a member at www.nnpa.org.

Where were all these Black women who now are pouncing on R. Kelly when all these booty-shaking videos were being made. And it is not just the fellas, you should see some of the girls who are making hyper-sexualized videos who portray themselves and other women as bithches and hoes and sex objects. […]

Black, white, Latina, Asian, Native, Palestinian and other women have starkly different experiences. We are joined by our gender but separated by the status of the men in our race, and by the differential privilege […]