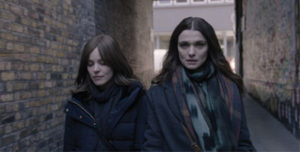 “Disobedience,” Sebastián Lelio’s follow-up to his 2017 Oscar-winning film,  “A Fantastic Woman,” opens with a beloved rabbi’s sermon on choice. He emphasizes that God gave mankind the freedom to chose—obedience or disobedience. The movie, with powerful performances by Rachel Weisz and Rachel McAdams, achingly portrays the damage done when a choice for love is depicted as wrong.

Set in an Orthodox Jewish community in London, Ronit (Weisz) returns to her childhood home to mourn the death of her father, the rabbi. She has been shunned by her family as a result of her love for a woman, Esti, (McAdams) years before. Esti has married their childhood friend, Dovid (Alessandro Nivola), despite her attraction to Ronit.

Lelio keeps everything understated—adeptly creating the tensions, the longing, and pain resulting from the love between Ronit and Esti that can-not be openly expressed and honored.

Dovid is deeply torn between the love he has had for both women since childhood and the teachings of his Jewish faith. When he is called on to step into the large shoes of Ro-nit’s father, he struggles to choose—allegiance to religious tradition, or “disobedience” by approving of the women’s love for each other.

The moral of the movie is reminiscent of John Steinbeck’s powerful novel East of Eden, and its translation of the words “Thou shalt” from the Ten Commandments. In the novel we are told the Hebrew word timshel, translated as “thou shalt” in most texts, is really “thou mayest.” Thus, we are being given a choice: we are neither asked to be saints nor doomed to be sinners. Instead, we have the power to choose.