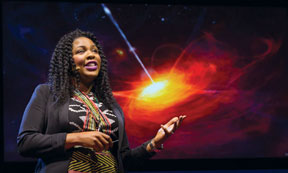 Dr. Jedidah Isler, the first Black woman to receive a Doctorate in A strophysics from Yale — This story originally found at Black Girl Long Hair: As the first African-American woman to receive a Ph.D. in Astrophysics at Yale University, Dr. Jedidah Isler is breaking down barriers and leading the way for other scientists of color. Currently a National Science Foundation Fellow at Vanderbilt University, Isler is well-aware of the role she plays both inside and outside the lab. Isler first became interested in astronomy as a child, but it wasn’t until she pursued her doctoral degree that she was able to study this childhood passion hands on. A 2015 TED Fellow, her personable TED talk about blazers, which are supermassive black holes at the center of active galaxies, has received over 800,000 views. Isler also hosts a monthly Google Hangout series called Vanguard: Conversations with Women of Color in STEM. Read more at Black Girl Long Hair Syracuse University News / Photo credit: TED