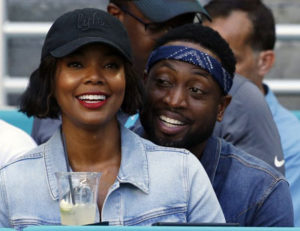 FILE – In this Sunday, Oct. 14, 2018 file photo, Miami Heat player Dwyane Wade and his wife Gabrielle Union-Wade acknowledge the cheers from the crowd during the second half of an NFL football game between the Miami Dolphins and the Chicago Bears in Miami Gardens, Fla. Miami Heat star Dwyane Wade and his wife Gabrielle Union-Wade have a baby. The couple on Thursday, Nov. 8, 2018 announced they’ve welcomed a baby girl into the world. (AP Photo/Joel Auerbach, File)

MIAMI (AP) — Dwyane Wade is back with the Miami Heat after missing nearly two weeks for the birth of his daughter.

Wade went through Miami’s gameday shootaround and will play Tuesday night against the Brooklyn Nets. He said his wife and their daughter are doing well, which allowed him to feel comfortable to resume his season.

“I’m going to obviously miss them,” Wade said. “It was tough leaving my little girl and my wife, but I’ve got to get back to work and I’ll see them again soon.”

Wade was away from the team for about two weeks because of the birth of his daughter. Wade and his wife Gabrielle Union-Wade welcomed Kaavia James Union Wade into the world on Nov. 7. Wade had been in Los Angeles with them since then, and flew back to Miami on Monday.

His return is most certainly welcome in Miami. The Heat went 2-5 in his time away, falling to 6-10 this season. They’ll play Tuesday without guards Goran Dragic (knee), Tyler Johnson (hamstring) and Dion Waiters (ankle recovery from last season).

“There’s a human element to this business and to the game and it is the most important thing,” Heat coach Erik Spoelstra said. “The connection, your spirit, your emotions, everybody getting on the same page, and just seeing Dwyane back here with the guys there was a tangible boost in the energy today in the shootaround.”

Wade is Miami’s third-leading scorer this season at 14.3 points per game. He was in his best stretch of the season when he got the call that his daughter was coming a few weeks earlier than planned.

He said he felt the frustration level his team was going through during their current slide, and he tried to keep in touch via texts and phone calls. Wade kept up conditioning while in Los Angeles, but knows it’ll take a little time to get back to the level of a few weeks ago.

The baby was born via a surrogate, which is one of the reasons why Wade felt taking a brief paternity leave was necessary.

Parents of surrogate-carried babies are told the first few days after the birth are critical to forging deep bonds with their child. Lots of skin-to-skin contact and talking to the baby helps with the bonding.

So Wade needed time, and the Heat supported the plan.

“So much of this league is mood of the team and confidence,” Heat guard Josh Richardson said. “With him back, we’re definitely a lot more confident moving forward.”

Union-Wade — who revealed she had nine miscarriages in her 2017 book “We’re Going to Need More Wine” — has taken time off work to bond with the new arrival. She’s been filming an upcoming project in Los Angeles, and when she’s back on the set, Kaavia James will be close by.

“She was working right up until we got the call,” Wade said. “When she goes back, my daughter will be going back to the set with her. Her trailer is fit for everything, the baby’s safety, everything. So our baby will be there with her when she’s at work.”

Wade strongly considered retirement during the offseason because of the baby’s arrival, not making the decision to return until just before training camp in September. He questioned whether it was fair to his wife and their family to still be playing and traveling while raising a baby.

He also wondered if he could handle being away from his daughter for long stretches.

“We went through a lot to get here,” Wade said. “My family had to come first right now.”

The music industry mourns the loss of a legend; former music executive, Adolph “A.D.” Washington, who passed away on November 22, 2017, in Little Rock, Arkansas. Born July 10, 1940, to William Ferguson and Ida Belle Wayne Ferguson in Scott, Arkansas, Adolph was affectionately known as A.D. […]