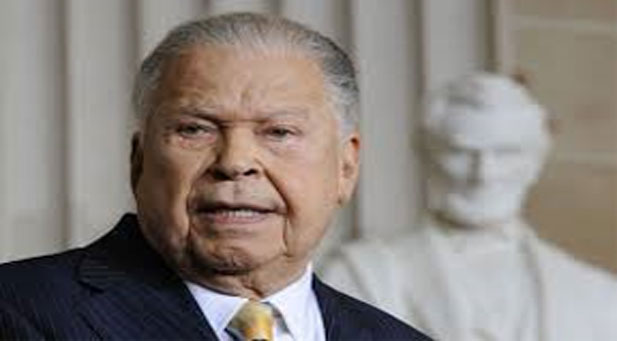 Ed Brooke doesn’t get his due

Sandwiched between the deaths of former New York Gov. Mario Cuomo and popular ESPN sportscaster Stuart Scott, the passing of former Massachusetts Senator Edward W. Brooke III at the age of 95 did not get nearly the attention it deserved.

Though two African Americans were elected to the U.S. Senate during the Reconstruction Era by the Mississippi legislature – Hiram R. Revels and Blanche K. Bruce, both Republicans – Brooke was the first Black elected to the upper chamber by popular vote, beginning his term in 1967. What made his election remarkable at the time was that a Black Republican Episcopalian could be elected statewide in Massachusetts, a predominantly Democratic and Catholic state with a Black population of less than 3 percent. It would be another 25 years before another African American – Carol Moseley Braun of Illinois – would win a U.S. Senate seat (1992).

Prior to his election to the Senate, Brooke served two terms as attorney general of Massachusetts. When he came to Washington, he declined to join the Congressional Black Caucus (CBC) and told Time magazine: “I do not intend to be a national leader of the Negro people. I intend to do my job as a senator from Massachusetts.”

While doing his job, Brooke showed that – as did several Black Republicans who would later follow him in public service, including Assistant Secretary of Labor Arthur Fletcher in the Nixon administration and William T. Coleman, Jr., Secretary of Transportation under Gerald Ford – he could be a Black Republican without selling out his principles or abandoning the fight for civil rights.

When Barry Goldwater won the party’s 1964 presidential nomination, for example, Brooke, the state attorney general, refused to be photographed with Goldwater or endorse the Arizona ultraconservative.

In the 1966 book titled, The Challenge of Change: Crisis in Our Two-Party System, he asked, rhetorically: “Where are our plans for a New Deal or a Great Society?”

Though fellow Republican Richard Nixon was in the White House, Brooke opposed Nixon’s attempts to abolish the Office of Economic Opportunity and the Job Corps and weaken the Equal Employment Opportunity Commission (EEOC).

And when Nixon nominated Clement Haynsworth and Harrold Carswell to the U.S. Supreme Court, Brooke was part of a bipartisan coalition that blocked the appointment of the two nominees who were considered hostile to civil rights.

On Nov. 4, 1973, Brooke be-came the first Republican to call for Richard Nixon’s resignation after the famous “Saturday night massacre” that took place when Nixon ordered the firing of Special Prosecutor Archibald Cox after Cox issued a subpoena for copies of Nixon’s taped conversations recorded in the Oval Office.

Brooke assumed an offensive posture as well, particularly on housing issues. He co-sponsored the Fair Housing Act of 1968, which prohibited discrimination based on race, color, religion or ethnicity. It was signed into law by President Lyndon B. Johnson a week after the assassination of Dr. Martin Luther King, Jr.

He continued to work on strengthening the law and in 1969, Congress passed the “Brooke Amendment” limiting public housing tenants’ out-of-pocket rent expenditure to 25 percent of the resident’s income, a percentage that has since in-creased to 30 percent.

With the Voting Rights Act up for renewal in 1975, Brooke engaged in an “extended debate” with John Stennis (R-Miss.) on the Senate floor that resulted in the landmark measure being extended and expanded. He was also part of the team of legislators who retained Title IX that guarantees equal education to females and the Equal Credit Act, a measure that gave married women the right to have credit in their own name.

In 1967, Brooke served on the 11-member President’s Commission on Civil Disorders, better known as the Kerner Commission, which was established by President Johnson to investigate the causes of the 1967 race riots and to provide recommendations for the future.

At various points during his career, Brooke was at odds with civil rights leaders and liberals. As attorney general, he opposed the NAACP’s call for a boycott of Boston’s public schools to protest the city’s de facto segregation, saying the law required students to stay in school. In the Senate, he opposed a program to recruit teachers to work in disadvantaged communities and opposed amending Senate rules to make filibusters against civil rights legislation easier to terminate.

Brooke also faced personal health challenges, including being diagnosed with breast cancer in 2002. He underwent a double mastectomy and was declared cancer free. Brooke spoke publicly about the illness, which strikes about 1,500 men each year, a disproportionate number of them Black.

In his 2006 autobiography, Bridging The Divide: My Life (Rutgers University Press), Brooke said, “My fervent expectation is that sooner rather than later, the United States Senate will more closely reflect the rich diversity of this great country.”

Throughout his life, Brooke did that exceptionally well.