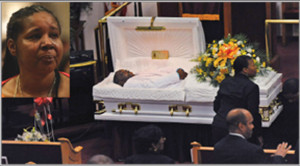 By Ryan Parker and Christina Littlefield

“This settlement is significant,” said Jonathan Moore, a civil rights attorney who is representing Garner’s family. However, he said, the family will continue fighting for justice.

Garner’s July 17, 2014 death during a clash with police “forced us to examine the state of race relations, and the relationship between our police force and the people they serve,” City Comptroller Scott M. Stringer said in a statement announcing the settlement.

Cellphone video captured the 43-year-old father of six arguing with police as an officer tried to arrest him on suspicion of selling untaxed cigarettes on the sidewalk in the Tompkinsville section of Staten Island, N.Y.

Officer Daniel Pantaleo can be seen wrestling with Garner in the video, and he places Garner in what some have called a chokehold as the two tumble to the ground.

“I can’t breathe,” Garner can be heard saying as he gasps for air.

Garner’s death was ruled a homicide due to compression of the neck and chest. A grand jury ultimately declined to indict Pantaleo.

Garner’s family has claimed that officers from the department’s 120th precinct routinely harassed him, and they filed a claim against the city last October.

In settling the claim, the city did not admit liability.

The settlement is the city’s biggest ever for a case of this nature, Moore said.

Garner’s relatives also reached a settlement with Richmond University Medical Center for a confidential amount, Moore said. The family sued the medical center, which provided the first responders, alleging poor care of Garner at the scene.

The family will continue to pursue federal, state and departmental charges against the police officers until they are re-moved from duty so that a death like Garner’s never happens again, Moore said.

“It is not about the money,” he said. “It is about whether these officers are brought to the bar of justice, and so far they have not.… This is by no means mission accomplished, this is just a step along the way.”

“I think these officers need to be held accountable,” Moore added. “What happened on that day was a gross violation of Eric Garner’s civil rights.”

Esaw Garner, the widow of Eric Garner, and hundreds of protesters rallied outside a courthouse Saturday to call on federal prosecutors to indict the white police officer who put the Garner in a fatal chokehold a year ago.

Garner’s death fueled an intense nationwide conversation about race and police officers’ use of force.

Weeks after Garner was killed, a white police officer in Ferguson, Mo., fatally shot Michael Brown. The 18-year-old Brown was, like Garner, un-armed and Black.

Ferguson police Officer Darren Wilson said he shot Brown because he feared for his life. A grand jury declined to indict him. Beset by public outcry, Wilson resigned from the department shortly there-after.

The shooting and lack of criminal charges against Wilson sparked protests and riots in Ferguson and across the country.

In November, a white Cleveland police officer shot and killed Tamir Rice, a 12-year-old Black boy who was holding a replica gun. The officer, Timothy Loehmann, said he had “no choice” but to fire. A judge found probable cause to bring criminal charges against him.

Those high-profile deaths and a string of others have become rallying cries.