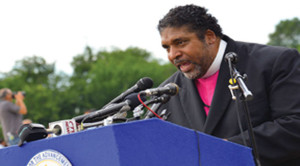 In the span of 30 days, federal judges have scuttled voter suppression laws in North Carolina, Texas, Wisconsin, Kansas and North Dakota, giving voting rights advocates a few, much-needed victories for the blood and sweat wrought in their court battles and protests since the controversial United States Supreme Court decision in Shelby v. Holder.

The day after the Supreme Court gutted the Voting Rights Act in Shelby v. Holder, Republicans in North Carolina, led by the Speaker of the House, introduced H.B. 589, one of the most restrictive pieces of election legislation in the country, which local advocates called the “monster bill.”

The measure included a strict ID requirement, a shorter early voting period; the elimination same-day registration; the prohibition of the counting of out-of-precinct provisional ballots; elimination of a pre-registration program for 16- and 17-year-olds; and making challenging voters easier.

Republicans have used the boogey man of voter fraud to justify introducing tough and onerous measures, but in the years since the Shelby v. Holder decision, GOP lawmakers have revealed their true intentions: to siphon off enough Democratic votes to ensure that (GOP) retains control of the levers of power across the national political landscape.

In late July, the United States Court of Appeals for the Fourth Circuit ruled against N.C. Republican lawmakers striking down the “monster” voting law in that state. The court found that North Carolina’s restrictive voting regulations “target African Americans with almost surgical precision.” Gov. Pat McCrory said that he would appeal the ruling.

“The court ruled on the most sweeping, retrogressive voter suppression bill that we have seen since the 19th century and since Jim Crow, and the worst in the nation since the ‘Shelby’ decision,” said Barber, during a lunch break at the Repairers of the Breach Moral Political Organizing Leadership Institute and Summit. “The [voter law] in North Carolina was intentional discrimination of the highest order. They were retrogressing racially through redistricting.”

Barber continued: “After ‘Shelby,’ we’re in a different place in that there was no protection for civil rights. Shelby took us back across the Edmund Pettus Bridge. If preclearance was in place, they wouldn’t have passed these laws. They spent between five million – six million dollars fighting us. To have the loss of the Voting Rights Act is an affront to the country.”

Barber, the pastor of Greenleaf Christian Church for the past 25 years, said there is too much racism, materialism and militarism across the country, adding that the socio-political process has been hijacked with too much of the national political discourse and activity poisoned by the dominance of regressive, immoral and hateful policy directed to communities of color, the poor, the sick, children, immigrants, voting rights, LGBTQ, the environment and religious minorities.

Legislators in North Dakota produced a law that mirrored North Carolina’s “monster” bill. The North Dakota law installed a voter ID requirement and limited same-day and early voting registration; it also removed what experts call “fail-safe” provisions, like the right for voters to prove their identity by signing an affidavit and then being allowed to vote. The law also restricted voters to producing just four pieces of identification which lawmakers merited as being valid; it restricted absentee voting, while disallowing prospective voters from using a bank statement, a bill, a college ID or an expired driver’s license. Recently, a federal judge in North Dakota blocked state officials from enforcing that law.

Meanwhile, Wisconsin Governor Scott Walker has led a full-throated charge for a voter ID law that disproportionately affects Black and poor residents in the state. Sam Fulwood, III, a senior fellow at the Center for American Progress, where he analyzes the influence of national politics and domestic policies on communities of color, explained in a story titled, “A Voting Rights Story,” that “when Wisconsin’s strict photo ID law was passed, it was found that 9 percent of registered voters did not possess a government ID, and experts testified at the trial that 300,000 eligible voters could be stripped of their right to vote. Since those requirements started, the state has rejected almost 20 percent of those who’ve applied for voter ID, a startling 85 percent of whom are African American, Latino, or Native American.” In August, a federal district court ruled against the raft of voter ID laws in that state.

“Since the Supreme Court gutted the VRA in 2013, states and cities have enacted a tidal wave of voter discrimination laws intended to restrict the right to vote for people of color, people with disabilities, students and others,” said Scott Simpson, director of Media and Campaigns for The Leadership Conference on Civil and Human Rights and The Leadership Conference Education Fund. “Recent court victories turning back a few of these laws have proven that that these efforts are widespread, require massive investments of time and money to litigate, and intentionally discriminate against voters of color.”

Simpson credited groups like the Leadership Conference Education Fund, the ACLU, the Advancement Project, Asian Americans Advancing Justice, the Brennan Center for Justice, the Lawyers’ Committee for Civil Rights Under Law, the NAACP Legal Defense and Educational Fund, and the NALEO Educational Fund for fighting against these laws in the courts, statehouses, in the media and at city, state and council chambers.

“It took years of litigation to strike down intentionally discriminatory laws, meaning countless voters were denied the right to cast ballots in the 2014 mid-term election and in this year’s presidential primary – and there’s no way to get those votes back,” said Simpson, who co-authored a report earlier this year detailing the spate of voter suppression laws and the potential impact on the presidential election. “In Texas and North Carolina, there have already been elections held where people were denied the vote. Discrimination has already happened.”

Simpson said: “It’s really tempting for people to celebrate these really hard-fought cases, but the fight is far from over.”

An educated reader listener is our greatest asset

An educated reader listener is our greatest asset
[…]

King and LBJ stood together

King and LBJ stood together
[…]