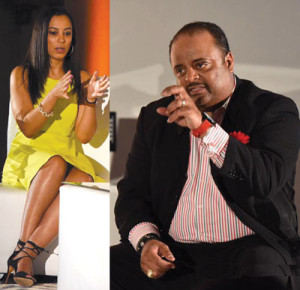 The 5th Annual South Florida Youth Summit, held May 18-20, kicked off with the adult only Cocktails & Conversations event with special guests Roland Martin, host of TV One’s Daily Morning Show, and CNN Political Commentator and CEO of IMPACT strategies, Angela Rye. The event encouraged interactive discussion between community leaders, educators, civic leaders, and parents on tactics to empower youth to assume positions of leadership and to become effective change agents in our community. The dynamic event was the first of many to take place that weekend, which included the L.I.T. Youth Rally (Leaders in Training), Blue Jeans & Blazers, and a day of seminars, workshops, and panel discussions on positive social change.

The shift from vertical leadership in the Black community (a remnant of the 1960s Civil Rights Era) to a more horizontal structure emphasized by Black Lives Matter grassroots organizing has ignited conversations on who shoulders the responsibility to advocate for Black interests and how to promote the most pressing issues in our agenda. The departure of Barack Obama and the ascension of Donald Trump emphasizes the urgency.

“We were so fixated on him being the first that we forgot he was the 44th,” Roland Martin stated at Thursday’s press conference hosted by Jill Tracey, host of HOT 105.1 FM ‘s HOT TALK. He was referencing the fleeting eight years of the Obama Presidency, a time in which he feels the Black community withheld warranted criticism because we were too enthralled by his historic win. Martin urged the community to stay vigilant and hold Black leaders just as accountable as all others.

Angela Rye pushed back on Martin’s accusations of Black complacency and discussed the scope of vigilant civic engagement as more than participating in elections.

“Stay woke by being knowledgeable.” Rye said, emphasizing the personal effort one must make to remain informed in our current heated, and often murky, political climate.

What is clear, is the old guard Black leadership is being forced to face their own political mortality. A new form of young leadership is forcing them to give way to change. As the second decade in the 21st century draws quickly to a close, we are finding ourselves in oppositional movements from all corners of the globe and Black and Brown youth are taking the helm. It has become the responsibility of current Black leadership to prep our young people for the future and that includes informing them of our history.

As Martin so eloquently put it, elections have consequences. Opportunities such as the South Florida Youth Summit are aiming to equip youth with the necessary skills to refute these consequences head on.

“Having Mr. Martin and Ms. Rye in South Florida was nothing short of amazing,” said State Representative Shevrin Jones, himself an aforementioned millennial leader, “I believe it is going to take a collective effort to save our youth and communities. No one has a monopoly on saving our youth. We all have a role to play.”

The African Continental Free Trade Agreement (AfCFTA) is an  agreement between African Union (AU) member states with a stated goal of creating a single market followed by free movement and a single currency. It was first presented and signed at the AU Summit in Kigali, Rwanda in March 2018. […]